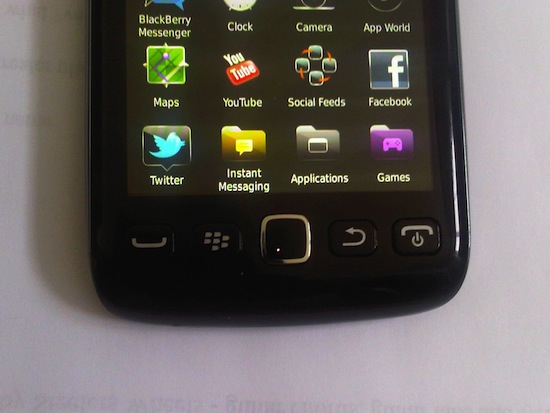 A new image has surfaced of the forthcoming BlackBerry Touch 9860 slate-style touchscreen BlackBerry smartphone, rumored to be coming to T-Mobile USA, which reveals that the device has individual navigation hardware buttons. Unlike some recent BlackBerry models, like some of the BlackBerry Curve devices where RIM makes the individual navigation button flush and hides it under a membrane skin to make it appear as a continuous extension of the display, much like the capacitive touch buttons on some Android smartphones, the new image of the BlackBerry Bold Touch 9860 shows a device that breaks with RIM’s aesthetic tradition and comes with 4 raised buttons. The BlackBerry Bold Touch also has an optical trackpad as well.