A short time ago, an image of the upcoming BlackBerry Z10, previously known as the BlackBerry L-Series, surfaced with Verizon branding which led many to wonder whether or not it would be coming to Verizon’s network. Now, it appears there is further confirmation as another image has all but confirmed a Verizon BlackBerry Z10.

At the beginning of January, an image of the BlackBerry Z10 sporting Verizon’s logo appeared, which seemed to point to a possible launch on Verizon. We know that Verizon has confirmed BlackBerry 10 devices like the BlackBerry Z10 for its network but RIM and Verizon have remained tight-lipped on exactly which would be heading there. 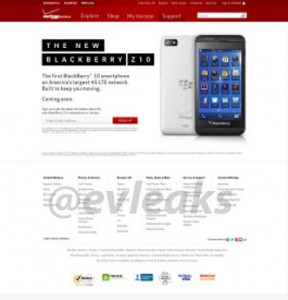 The photo depicts the BlackBerry Z10 itself and its branding on Verizon’s website. That landing page isn’t live yet on Verizon’s official site but we imagine that it will look similar to that after RIM’s January 30th BlackBerry 10 announcement.

Of course, this isn’t outright confirmation of the BlackBerry Z10 for Verizon but evleaks is a credible source and with Verizon sporting the largest 4G LTE network in the land, it would be odd to see the BlackBerry Z10 miss out on it, especially since Verizon has confirmed BlackBerry 10 for arrival.

We’ve seen the BlackBerry Z10 leak out several times in recent weeks with it emerging in photos and on video and more recently, in a full layout of its specifications.

The device will evidently sport 16GB of memory and according to the cases we saw at CES, it could have a microSD card slot for expanded storage space beyond that initial 16GB.

No release date for the device is known as of yet but RIM told us at CES 2013 that devices would be released shortly after launch later this month.

In addition to Verizon, AT&T, Sprint and T-Mobile have all confirmed BlackBerry 10 for their networks.