The BlackBerry Z10, also known as the L-Series, and the device that is expected to be arriving on January 30th alongside BlackBerry 10, has appeared in what appear to be official press shots showcasing what consumers can expect from RIM’s flagship BlackBerry 10 smartphone.

The images, courtesy of the reliable evleaks Twitter account, showcase what look like official press images of the BlackBerry Z10. Prior to this leak, we had seen the BlackBerry Z10 appear in a leaked ad, in candid photos and on video, but never had we seen it appear in official images. Now, we have what are very likely the images that RIM will send to the press when the device debuts at an event on January 30th. 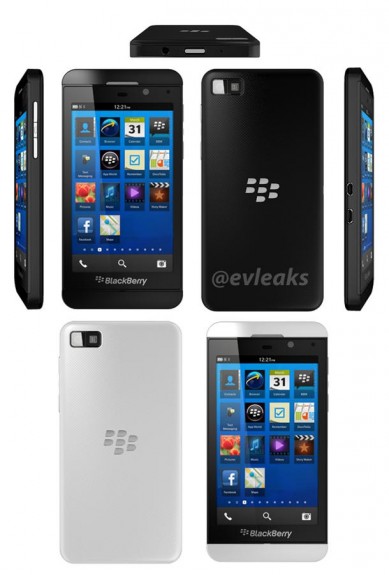 This is the BlackBerry Z10.

Those are familiar with the device already aren’t going to see anything new. This is the same device that we’ve seen leak out several times over the last few weeks ahead of its official launch date. Those that aren’t familiar are going to be starring at what is going to be RIM’s first BlackBerry 10 device with all-touch. The BlackBerry Z10, previously called L-Series, is expected to arrive alongside a device possibly dubbed BlackBerry X10, a device that is said to have a traditional QWERTY keyboard.

Both devices will be running RIM’s BlackBerry 10, which the company showed off to us in detail on a developer device at CES 2013 in Las Vegas.

A video showcasing BlackBerry 10’s features can be seen below.

The BlackBerry Z10 is expected to be outfitted with specifications that are more powerful than any previous RIM smartphone. It’s expected to feature a 4.2-inch display with a resolution of 1280 x 768, 16GB of memory and according to the cases we saw at CES and its FCC filing, a microSD card slot for expanded storage space, two cameras, NFC support, Bluetooth and access to 4G. It’ll also have an 1,800 mAh battery to keep it powered.

Verizon is all but confirmed to be a carrier of the BlackBerry Z10 and it’s rumored to be coming at a cost of $149.99 on-contract. No release date has emerged thus far for the U.S. but Canada appears to be set for a February 5th release date.