While the company just announced the phone, and users can’t get one until March, there are already several reviews of the device online. Overall, the reviews are fairly mixed. Several reviews point that while the new BlackBerry 10 OS is interesting, it lacks any killer unique apps to make it stand out from iOS or Android. Reviewers also point out poor battery life as a major downside of the new phone. 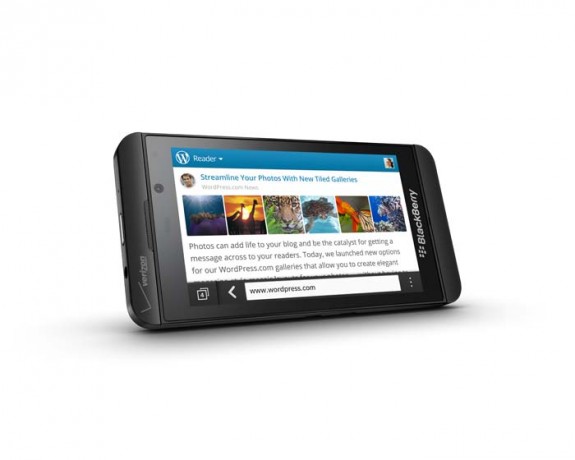 Here’s what a few reviews had to say about the new device:

Joshua Topolsky of The Verge had mixed feeling about the BlackBerry Z10. He likes the phone, but laments the lack of a killer app:

The problem with the Z10 is that it doesn’t necessarily do anything better than any of its competition. Sure, there are arguments that could be made about how it handles messages or the particulars of its camera, but no one could argue that there’s a “killer app” here. Something that makes you want or need this phone because it can do what no other phone can do. That’s not the case — in fact if anything is the case, it’s that the Z10 can’t yet do some things that other devices can. Or at least, can’t do them quite as well.

Mike Michaluk of BlackBerry fan site CrackBerry wrote a very detailed look at the BlackBerry Z10. Of the device, he says it’s good, but there is room for improvement:

Like all BlackBerry devices, the Z10 feels great and has great build quality. After waiting so long for BlackBerry 10, it would have been nice to see a device that was at the leading edge of the specs race. Z10 comes up with good specs, and delivers great performance, but there are areas where we could be wowed a bit more. The display has the pixel density, but doesn’t seem as good as it could be. The camera is good, but given how much people take pictures these days it would be great to see a camera that was outstanding.

Time Steven of Engadget also says the BlackBerry Z10 is a good phone, but the platform isn’t great:

But, tragically, there’s really nothing to love. Nothing in the Z10 stands out as class-leading and, while the BB10 OS does have a lot of charm and brings all the best productivity-focused attributes of BlackBerry to bear in a much more modern package, the app selection is poor and the gestures here aren’t so good that they make up for that major shortcoming. Will more and better apps come with time? Absolutely, but after waiting this long (and then making Americans wait another month yet) BlackBerry really needed to make a huge impact out of the gate. Unfortunately, it hasn’t.

Jonathan Geller of BGR is skeptical about the direction BlackBerry chose for its new OS. He says it just isn’t as good as other players in the market:

As the software capabilities grow with a much better browser, all-touch keyboard and other features, it feels like RIM loses it’s core. The company is forced to try to reinvent the smartphone and in the process just seems to end up making an iPhone, Android, and Windows Phone competitor that isn’t as good as any of them. And in several ways, it isn’t even as good as the BlackBerry before it.