In the U.S. market, those who are eager to jump on the BlackBerry 10 OS bandwagon with the slate-styled BlackBerry Z10 smartphone may want to look to AT&T as the carrier is speculated to be the first to offer the device in the States. The BlackBerry Z10 will be arriving on three of four national carriers; Sprint had announced it would skip the Z10 in favor of offering only the QWERTY-enabled BlackBerry Q10 for its LTE network. 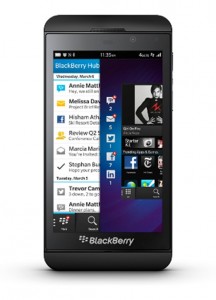 The BlackBerry Z10 will also be coming to Verizon Wireless and T-Mobile USA. It was previously speculated that T-Mobile may be among the first carriers to make the BlackBerry Z10 for U.S. customers on March 27th, but if the latest report holds true then AT&T Mobility would offer the Z10 almost two full weeks in advance of its closest rivals.

Verizon Wireless customers may have to wait a little bit longer. Verizon is known for putting devices under heavy scrutiny before launch through a rigorous testing process. That testing process may mean that Verizon’s variant may launch at the soonest in April, according to a report published on Phone Arena.

Most recently, BlackBerry had tweeted that the BlackBerry Z10 would be arriving in the U.S. in the coming weeks, but the company did not specify an exact availability date. BlackBerry reps told GottaBeMobile that it was still waiting for carriers in the U.S. to approve the device before it officially goes on sale.