New photos of the BlackBerry 10 L-Series, now thought to be called the BlackBerry Z10, depict the device with Verizon branding which could mean that Verizon will wind up as one of the device’s launch partners. 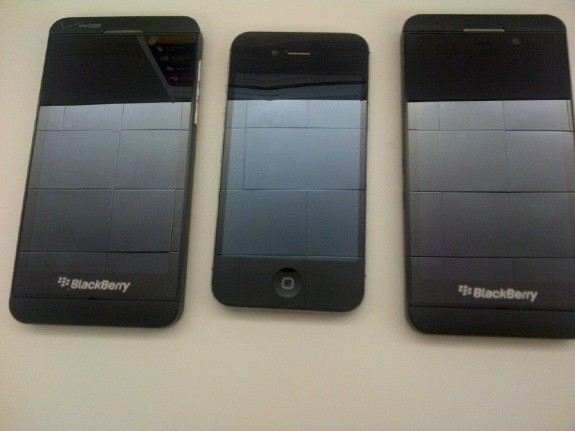 The BlackBerry Z10 smartphone has emerged with Verizon branding today.

The person who is reportedly in possession of the device claims that he has been testing it with both AT&T and Verizon though only the Verizon logo is visible in the photos. Verizon already confirmed that it would be hosting BlackBerry 10 devices on its network so this should come as no surprise. T-Mobile USA also has confirmed BlackBerry 10 for its network as well.

The person who has the BlackBerry Z10 made some quips about the device itself and says that the build quality is “really nice”, the screen looks “great”, the web browser is very “quick” and it takes one minute to boot up. We also see it posed next to the iPhone 4S to show just how big the device actually is.

This is not the first time that the BlackBerry Z10 has leaked as the device recently showed up in some detailed photos and more recently, emerged on video. That video, from Vietnam, can be seen below.

We’ve also seen the BlackBerry Z10’s QWERTY counterpart leak out numerous times in the past few days, a sign that it could be joining it on January 20th when RIM debuts the future of its smartphone lineup.