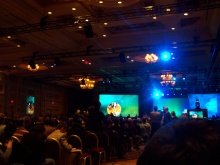 After a crazy run/ride to the site I finally found a seat (another story for another day) in the back of the auditorium for the Bill Gates KeyNote at CES. I’ll be watching mostly on the large screens at either side of the stage. I’ll blog as things go along as of right now I’m just trying to catch my breath and waiting along with everyone else.

Still waiting and having massive WiFi issues. Going to EVDO.

Gates is being introduced now by the head of CES.

Clever video retrospective of Gates’s past keynotes including the silly and the faux pas’s.

Gates is filling the audience in on what went into the development of Vista and Office 2007.

First up is search. “Vista is not about searching, it’s about finding.” Search will search not only your local PC but all Vista machines on your network.

Demo of Shadow Copy, a new feature that allows you to recover documents.

Now a demo of Word 2007 formatting followed by a link to Windows Live Search touring Las Vegas in a virtual 3D map of Vegas. We saw this this afternoon and it is very cool. Maybe Rob, Dennis or Matt can grab a screen shot and post it up. (Hint, Hint)

Windows Media Center with a demo of Sports Lounge, a sports fan’s dream to follow live spots events and also track all of your fantsy leagues. Cool demo of watching a live HDef game in a window while working on the desktop.

Ultimate Extras: Features that will added if you buy the ultimate SKU. Two being shown off. DreamScene is full motion video as your desktop background. Group Shot is neat photo app that allows you not only to crop and manipulate, but digitally create one picture from aspects of several.

Fancy video of the new devices listed above, inlcuding the new OQO that Rob bluescreened in our tour of the Partner Pavillion this morning. (We’ll be blogging about these devices in more detail soon, if they let Rob out

Now we are hearing about the HP Media Smat Server powered by Windows Home Server. Due for the second half of this year. This device allows you to connect up all of your devices and computers in the home.

Gaming. Lots of shoot em ups in a fancy video. Xbox is selling ahead of pojections (10.4 million consoles in 37 countries and over 5 million folks sharing the network.)

IPTV now running on the XBox. Look for that Holiday 2007.

Now we are talking about Sync, a partnership with Ford to allow use of all of your portable media devices in sync (obviously) in one solution for the car. Not just rolled out in luxury vehicles.

Gates is closing by talking about the long view and the future. The Connected Home of the Future.

Thoughts after dinner and thinking things through:

I’ve never been to a CES Keynote of any kind, much less one given by Bill Gates. With a very few exceptions there wasn’t much real “news” in the keynote. Most of what was discussed we’ve all heard before in some fashion. Those few exceptions include some of the Vista Ultimate Extras, the news about working with Ford on connecting things up in your auto, and of course the new devices.

As far as those new devices go, we’ve heard about Toshiba’s new R400 which is impressive to look at, hold, and manipulate, and the SideShow Edge Display is a cool feature. But in my opinion the device is sorely lacking when it comes to some specs (a 4200 HD?) The wireless dock is a cool new device and points squarely to the tsnumai of media, media, media that is ever present. We glimpsed OQO’s new entry and the Medion entry but haven’t had much time to get our hands on these devices, (since Rob crashed the OQO this morning) so time will tell, although my personal first glance left me not too excited about these ultra-mobile entries.

All in all I think the necessary and well deserved focus on Vista leaves us still looking down the road for what Vista will bring. What we are seeing now in terms of release ready hardware is more than likely going to be just a taste of things to come. I just get the sense that we’ve got a lot of potential for the future and not necessarily today.