Bluetooth 4.0 Rebranded as Bluetooth Smart as it Heads for Broad Adoption

Finally digging itself out from the geek niche, The Bluetooth Special Interest Group (SIG) is rebranding the latest version of the Bluetooth wireless standard, version 4.0, to make it easier for consumers to understand how different BT devices relate to one another as this new standard aims for broad adoption. 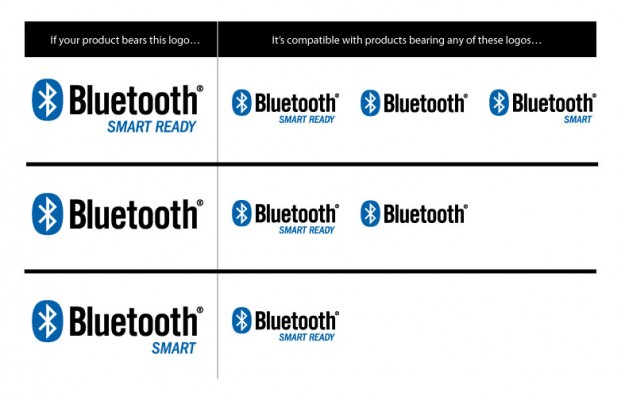 Why is this important?

Ever wonder why your Bluetooth headset can’t pair with your Bluetooth keyboard? No, of course not because you’re a geek and you understand that Bluetooth pairing requires a computer-type device somewhere in the mix, be it between a BT keyboard and a tablet, a BT headset and a smartphone, or between a couple of PCs exchanging data. However, the current Bluetooth icon on your gadget doesn’t tell you that. The new “Smart” branding will indicate which end of that pairing relationship a device is on. Got a Bluetooth Smart device? To access it, you’ll need a Bluetooth Smart Ready device. Pretty standard +/- relationship.

Bluetooth Smart devices will be limited to the low energy Bluetooth 4.0 connection and will pair with Smart Ready devices only. This typically means they’ll be designed to transmit a specific piece of data, such as heart rate. More power-hungry input devices, such as headsets and keyboards, will continue to use the standard Bluetooth mark. These will also be compatible with Smart Ready devices. Smart Ready devices will be compatible with all versions of Bluetooth. The old non-specific branding muddies things a bit, but the new Smart branding is designed specifically to indicate those limitations of a Bluetooth Smart device.

This new branding is going to be more important going forward because Bluetooth 4.0 is aimed much more broadly at consumers than previous versions. Its dramatically lower power consumption means it can provide constant connectivity in a greater variety of devices. Heart monitors and pedometers are the most commonly used examples, but all sorts of biometric sensors, including those used in intervals such as pressure and glucose meters, can benefit from this. Beyond biometrics, watches, wallets, keys, basically anything you carry on you on a regular basis could be equipped with BT Smart technology for your personal monitoring and tracking.

When is this happening?

It’s pretty much started. Apple snuck BT 4.0 on Macbook Airs earlier this year, while the iPhone 4S is the first phone on the market with it, though these don’t carry the new branding yet. Motorola is getting things started as well with the new RAZR and MOTOACTV, which are both coming with BT 4.0. The MOTOACTV smartwatch will particularly interesting since it acts as both a sensor and receiver, capable of pairing with BT headphones that can monitor heart rate. If it gets the branding, the MOTOACTV should be considered “Smart Ready” but its BT headphones would get the standard brand since it’s not 4.0-only. While the rebranding does not change the technology, it does signify a major step forward in the adoption of Bluetooth and wearable computing.