For people who want to turn their bluetooth on or off on an iPad or iPhone quickly, the only way was to jailbreak it and install an app or widget that lets you do it fast. Thanks to Bluetooth OnOff. (yes there’s a period at the end of the name) you can turn on iOS Bluetooth in just one tap without jailbreaking your device.

The app works on an iPhone, iPod Touch or an iPad and adds peer-to-peer chat support as a bonus.

Download the Bluetooth OnOff. app and fire it up to test it. You can turn on Bluetooth by tapping the On/Off button familiar to all iOS users.

The real magic of this app comes when you install it and then open Settings. Find the OnOff app in the list and toggle the On/Off button. From now on, instead of using it to chat, the app will simply toggle your Bluetooth radio each time you tap the app icon from the iOS Home screen. It will turn on or off Bluetooth and then turn the app off instantly. You can’t use the chat feature with this setting turned on in the Settings app. 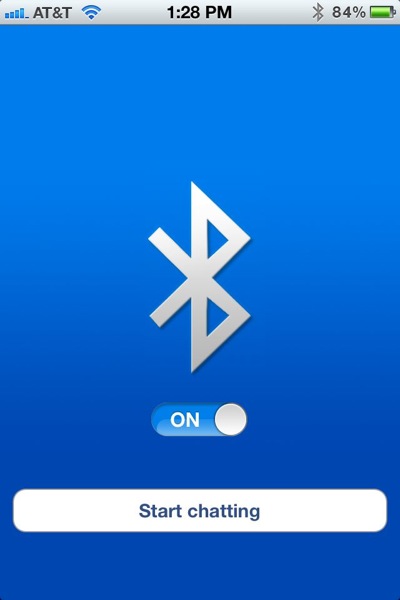 To use the included chat feature just tap the Start Chatting button at the bottom. Another iOS device will have to run the app nearby to make this work. The app will list all the iOS devices with the app running nearby. Tap one to chat. That person’s device will ask them to allow it and you can chat away.

I tested Bluetooth OnOff over the last week and find it so convenient to have a quick way to turn bluetooth on when I need it and then turn it off when I don’t. It  conserves battery life and saves a little time. 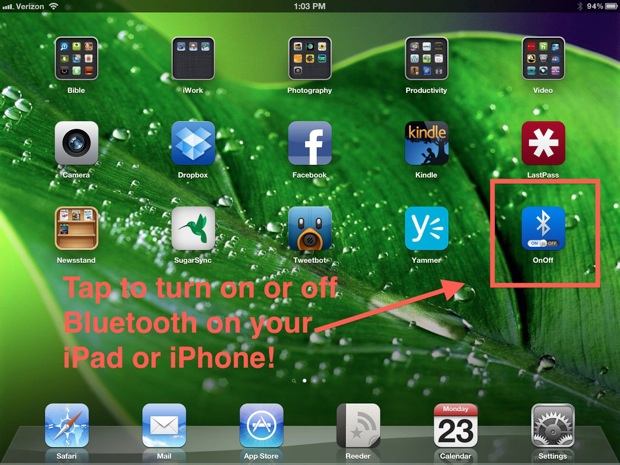 Without a simple tool like this, you must perform a minimum of four taps. For some reason it feels even more annoying opening the Settings app, finding the General tab and then tapping on Bluetooth. From that screen you turn Bluetooth on or off. If you used Settings recently and it might reopen to a screen other than the main Settings screen and it takes more than four taps because you have to go back a screen or two to get to the main screen. 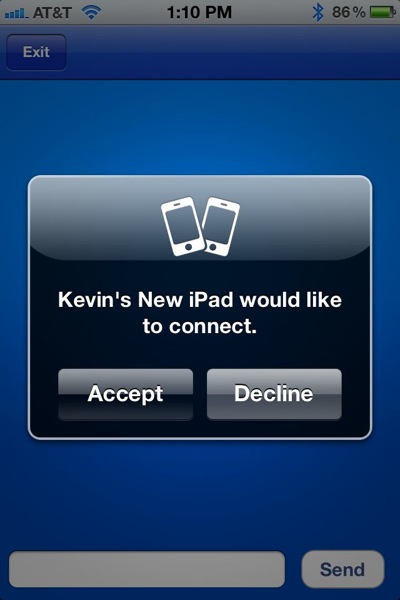 The included peer-to-peer chat tool doesn’t really work that well. Connections drop easily if they work at all. If that was the only use for this app, then I wouldn’t recommend it. I doubt the makers really anticipated that use much since changing the Settings switch as described above turns off the chat feature entirely.

It would not surprise me if the creator added it get it past the app police at Apple since Apple doesn’t approve apps that let you change settings without using their Settings app. 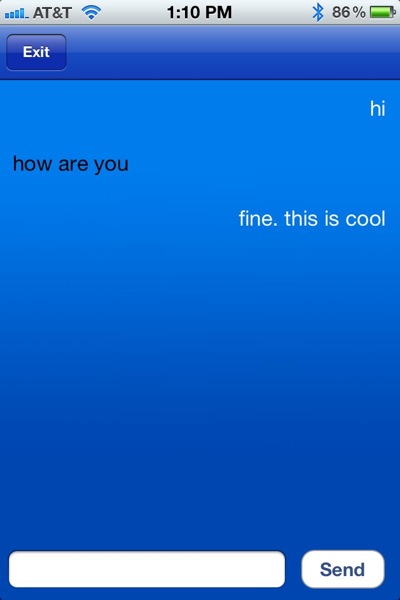 I don’t plan to use Bluetooth OnOff. for chat so I turned on the instant Bluetooth toggle feature described above. I’m glad I downloaded it just to do as the name says – turn Bluetooth on and off quickly. You can too for just $.99 from the iTunes App Store.

Now that we know this works, I’d like to see other apps to turn on or off other features like Wi-Fi, Personal Hotspot, Notifications and Location Services. Better yet, give me one app that has five buttons for each of these functions. Tap it to open and tap the button for one of those features.