Gamers who haven’t upgraded to the next generation versions of Microsoft and Sony’s video game console do have one big exclusive game to get excited about this fall. Today video game 2K Australia and Take-Two Interactive revealed that PS3 and Xbox 360 users can expect Borderlands: The Pre-Sequel to be available this coming October.

More specifically, users can expect Borderlands: The Prequel to arrive on store shelves on October 17th of this year. 2K Australia revealed the news in a spectacular two-minute long trailer that also included featured characters dancing to house music and more.

In addition to revealing the slightly changed graphics from previous versions of the game, the trailer also revealed the new things that users can expect in Borderlands: The Prequel. 2K Australia is delivering a whole new playing experience by introducing low-gravity environments. It’s also promising tons of new vehicles, and new enemies dubbed Moon Monsters. 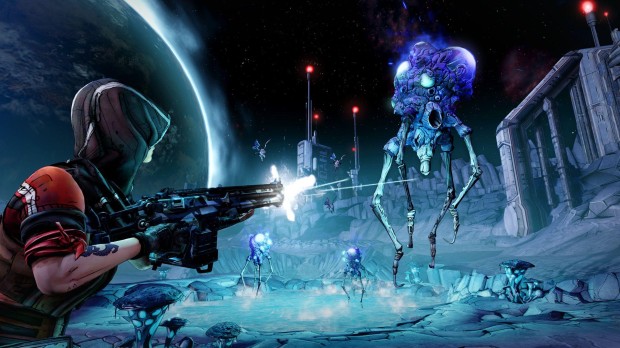 Unlike other first-person shooters, Borderlands adds role-playing elements into the mix. When beginning the game users are asked to choose a specific character class to build on. By choosing that class they’re keeping themselves from using the special abilities other character classes might have, however they’re also granted abilities specific to their chosen class, like brute force for example.

Borderlands: The Pre-Sequel is set in space, hence the new oxygen tanks that will allow players to move around and the aforementioned zero gravity environments. Players will also have new freeze weapons at their disposal. Borderlands: The Pre-Sequel buyers will play as one of four characters the gladiator, the enforcer, the fragtrap and the lawbringer. The Fragtrap is actually Calaptrap, a non-playable robot that was heavily featured in the last game, Borderlands 2. These characters will have much more dialogue than playable characters did in past games, according to reports.

Like past Borderlands games, killing enemies will still earn users “loot” that they can use on their characters for more abilities. All of these elements are taken from role-playing games where the idea is to encourage the user to heavily invest in their specific character. All that being said, the gameplay itself completely relies of first-person shooter mechanics. The idea is clear, players are to take advantage of the abilities granted specifically to their class.

Borderlands: The Pre-Sequel is actually built using the same engine and technology from Borderlands 2. Clearly, 2K Australia wants users who loved the first two games in the series to feel right at home in this game. That being said, 2K did expand on that gaming engine to add many of those new features it showed off in today’s trailer.

It’s not often that last-generation consoles like the Xbox 360 and PS3 get exclusive games users are excited for these days, but Borderlands: The Pre-Sequel is such a game. This is only the third version of the game to see release, but the franchise has clearly caught on with gamers. The game’s developers are betting that the huge install base of Xbox 360, PS3 and PC players who loved the game the first two times around won’t have a problem picking it up for their console if they haven’t upgraded.

Borderlands: The Pre-Sequel won’t get Xbox 360 and PS3 users to themselves, there will be other high-profile titles for users to purchase. Still, last-generation gamers are expected to pick up the new title in droves. In theory, users who’ve adopted the Xbox One and PS4 within the first year are hard-core gamers themselves, that means they’re more likely to have kept their older console around to play the games they enjoyed on it, so this is a no-lose situation for everyone involved.

Borderlands: The Pre-Sequel will cost $59.99 when it arrives on store shelves.