The new Breaking Bad: Alchemy interactive book is now available on the iPad, giving fans a detailed look into the TV show as the final episodes draw near.

Breaking Bad: Alchemy provides iPad users with an interactive timeline of the entire series to date, and will update every week as episodes in the final season air on AMC. The iBook includes character biographies, breakdowns of each individual episode and 3D models of sets for the show so fans can explore Walter’s lab.

The new iBook even has detailed information about the science shown in the show. It details, for example, the white phosphine Walter uses in the first few episodes to subdue the drug dealers in his RV. 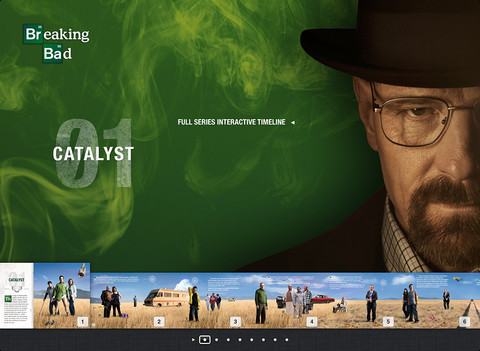 Series creator Vince Gilligan and other producers recorded interviews for Breaking Bad: Alchemy, in addition to the 100 pages of content in the book and more than 350 interactive elements. The content should help hold over some fans who anxiously wait for the August 11 premiere of the final season of the show.

Breaking Bad: Alchemy is available now for $7.99 in the iBookstore. The book is only available for the iPad and iPad mini, leaving out Android users who might want to read through the book.

The new iBook is a great way for fans to catch up with the series before it all comes to an end later this year. If previous seasons are anything to go on, the last eight episodes of Breaking Bad will make frequent call backs to earlier episodes. A lot of people will probably die in the final episodes, and it’s probably a good idea to get a refresher on those characters so the deaths mean something.

Those who can’t buy the $7.99 Breaking Bad Alchemy (or who don’t want to) do have other ways to catch up, however. Netflix currently has the first four seasons of the show available for streaming, and Apple also has all five seasons available for purchase for $19.99 or less per season.