Less than 30% of Geeks Using IE When Visiting GBM

According to a Network Applications report, Internet Explorer’s popularity’s at 10 year low. Less than 60% of web users are choosing to surf with IE and more than 40% are opting for alternatives such as Firefox, Chrome and Safari. The share of GBM readers visiting this site with IE is falling pretty quickly.Based on our web statistics here at GBM, I wouldn’t be surprised to see IE’s market share to fall much further. 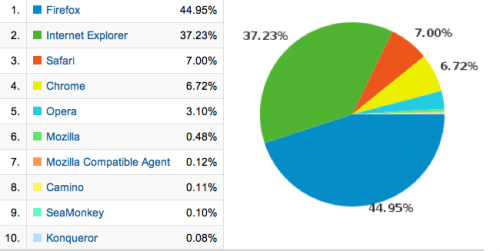 Firefox usage dipped slightly last month compared to a year ago, while Chrome and Safari usage more than doubled. 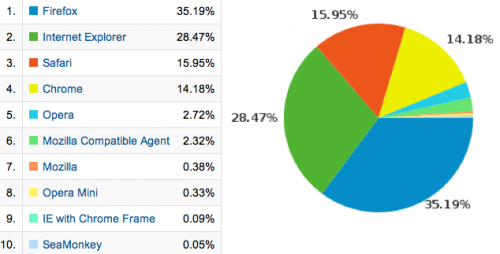 The biggest surprise to me when I pulled the above stats from Google Analytics this morning was how popular Safari and Chrome has become with our visitors. Combined, these two WebKit browsers make up just over 30% of the pie. We have been covering the iPad and other Apple products quite a bit, so it’s pretty natural to attract more Mac users. More than two thirds of our visitors using Apple products stick with Safari, the default browser on MacBooks, iPhones and iPads. In contrast, more than 70% of GBM’s visitors that run Windows are choosing an alternative to the default browser.

I split most of my browsing time being Firefox and Chrome. I’m increasingly relying on Chrome on both my PCs and MacBook Pro as I find it more reliable and less resource intensive than Firefox.

If you’re reading this, there’s a 71.53% chance that you’re not using Internet Explorer right now. Why not? What prompted you to use Chrome, Safari, Firefox or Opera?