The Brydge Keyboard puts a MacBook style keyboard on the iPad, or at least that’s the company’s advertised promise. However, does it really match the excellent typing experience users get from a MacBook? 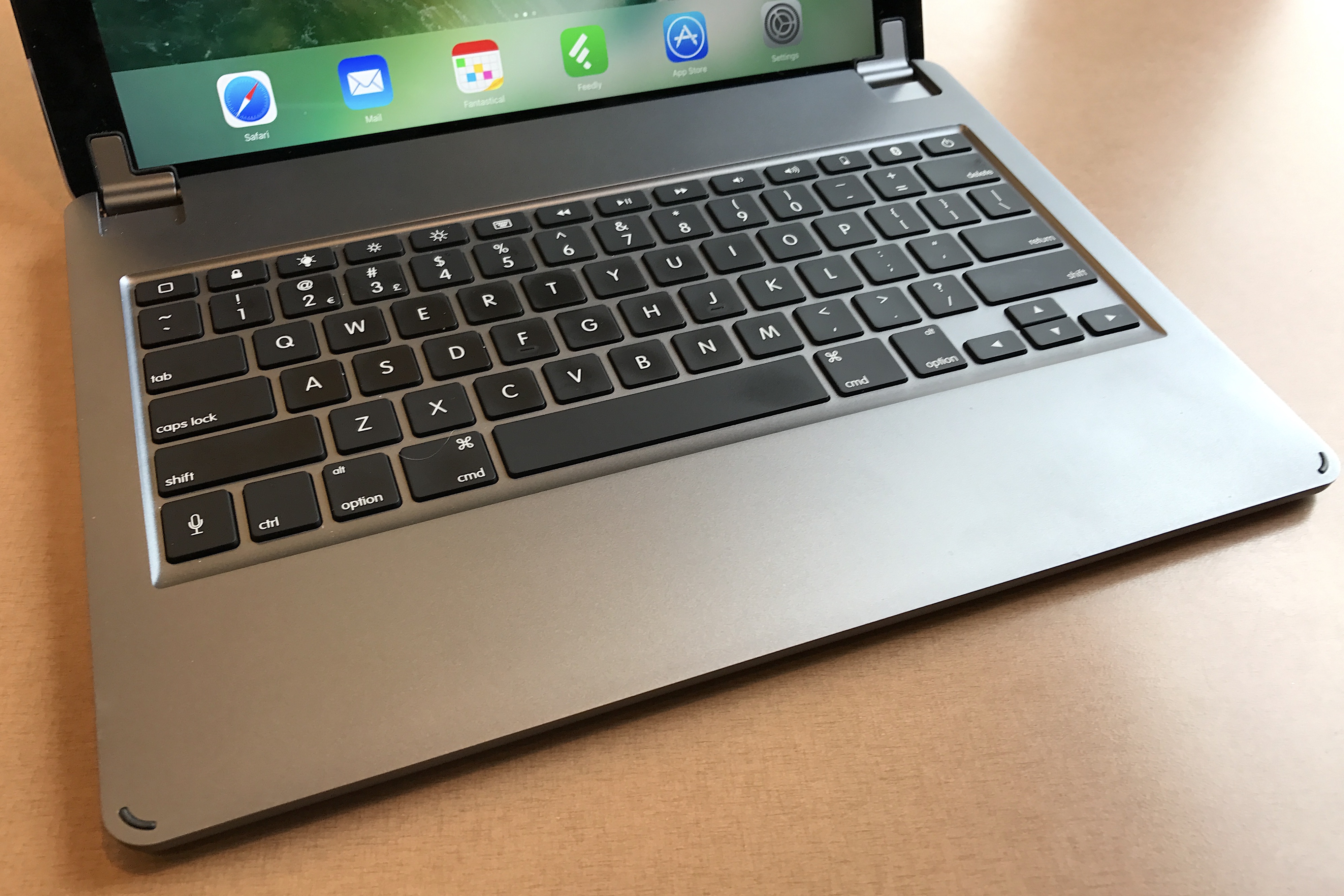 The Brydge Keyboard connects to the iPad using Bluetooth and a pair of clamps which grab hold of the iPad along the two lower corners while in landscape mode. The heavy 12.9-inch iPad Pro fits well and the keyboard holds it up at all the angles from open nearly 180-degrees so the screen and keyboard lay flat on the table or desk to fully closed. 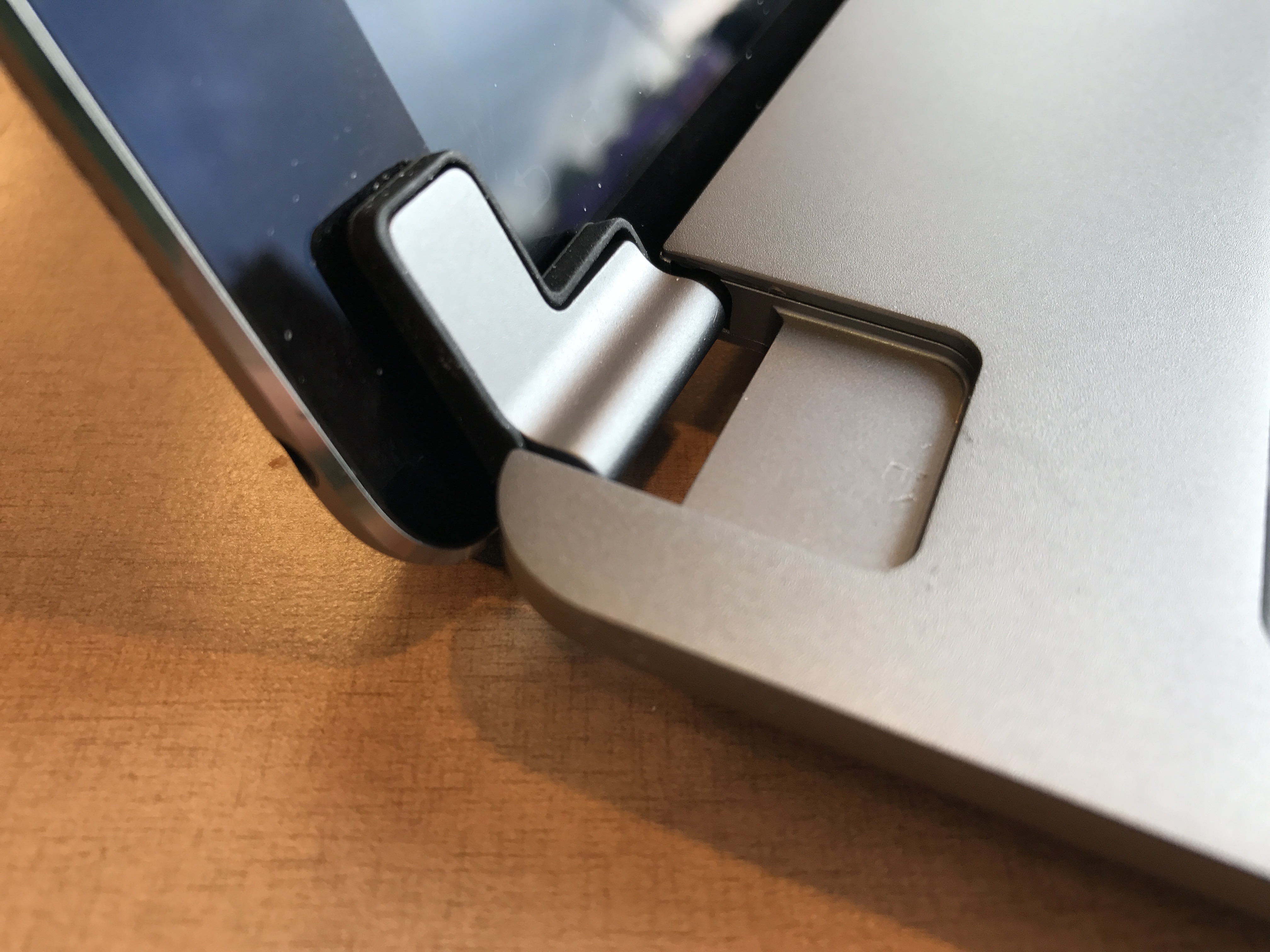 The two clamps come with a rubber material which won’t scratch the iPad’s soft aluminum or the glass bezel. If your iPad feels lose, the instructions tell you to pinch the clamps to tighten them up. 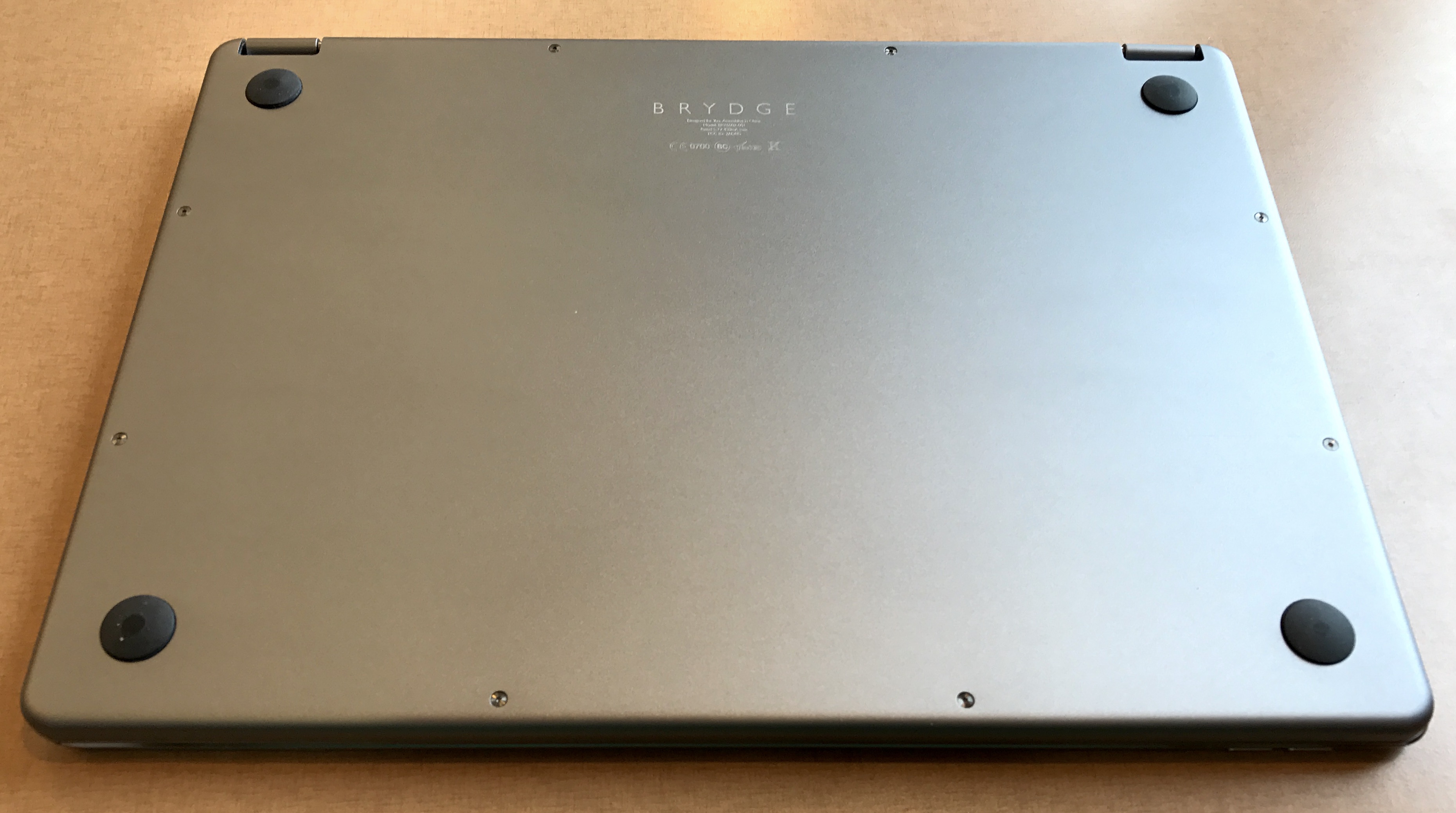 The bottom of the keyboard comes with some non-skid feet to keep it in place, even on slick surfaces. When you attach the iPad to the Brydge Keyboard and close it, the system feels a lot like a Macbook Air. 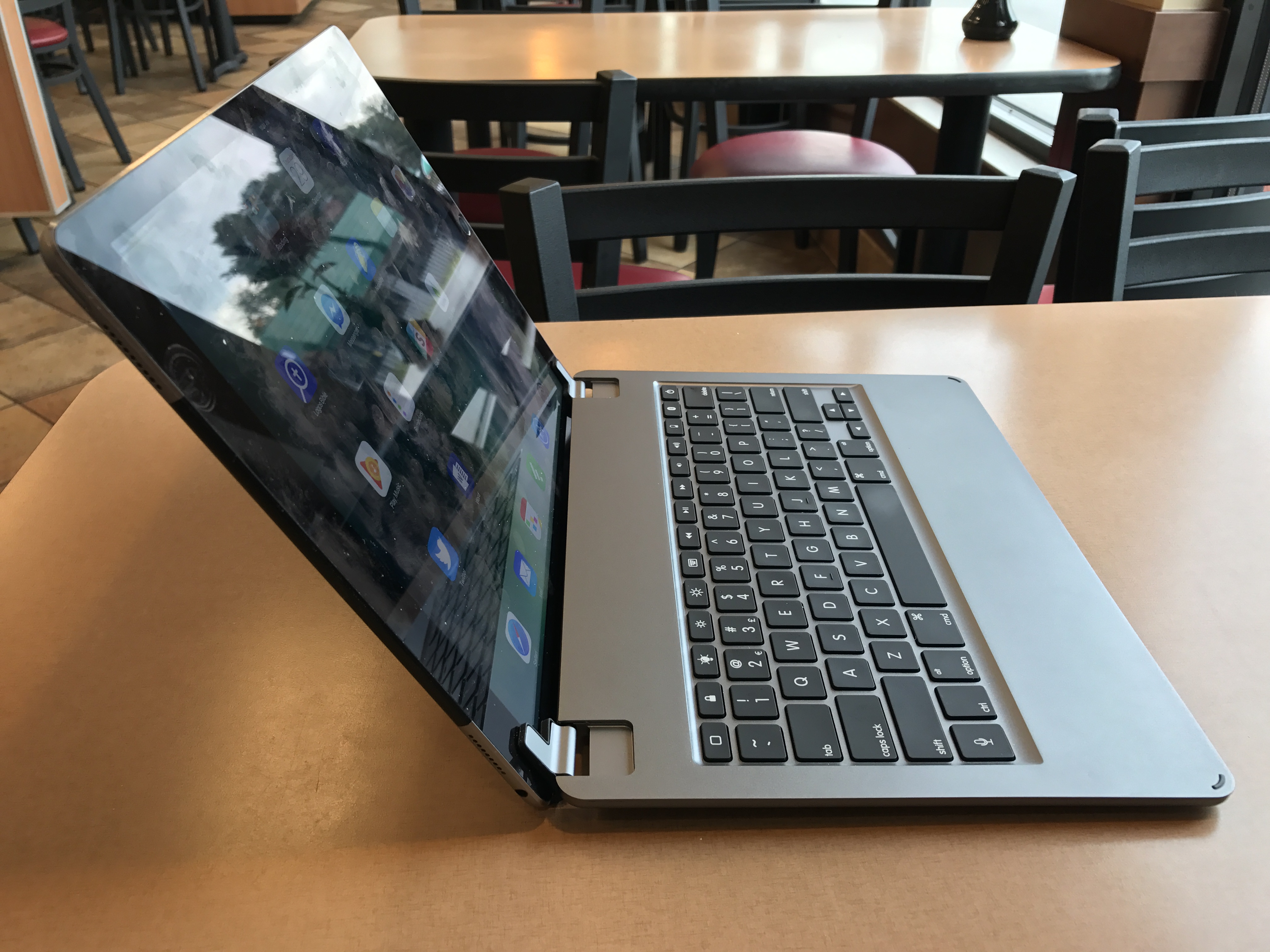 The top edges of the Brydge Keyboard feel sharp. They won’t cut your skin, but can get a little uncomfortable. This is especially true if you rest your wrists on the wrist-rest of the keyboard for a long time while typing.

Since the Brydge Keyboard connects via Bluetooth, the user will charge it with the included micro-USB cable. I tried other micro-USB cables, but they don’t fit into the charging port. It’s recessed more than normal and needs a longer connector than most cables have.

The user can check their keyboard’s battery life using the battery key along the top row third from the right. Tap it and the light blinks four times for a full battery down to one for a low battery. When the keyboard battery drains and needs a charge, the light starts flashing slowly. It also blinks twice each time the user turns on or off the keyboard. 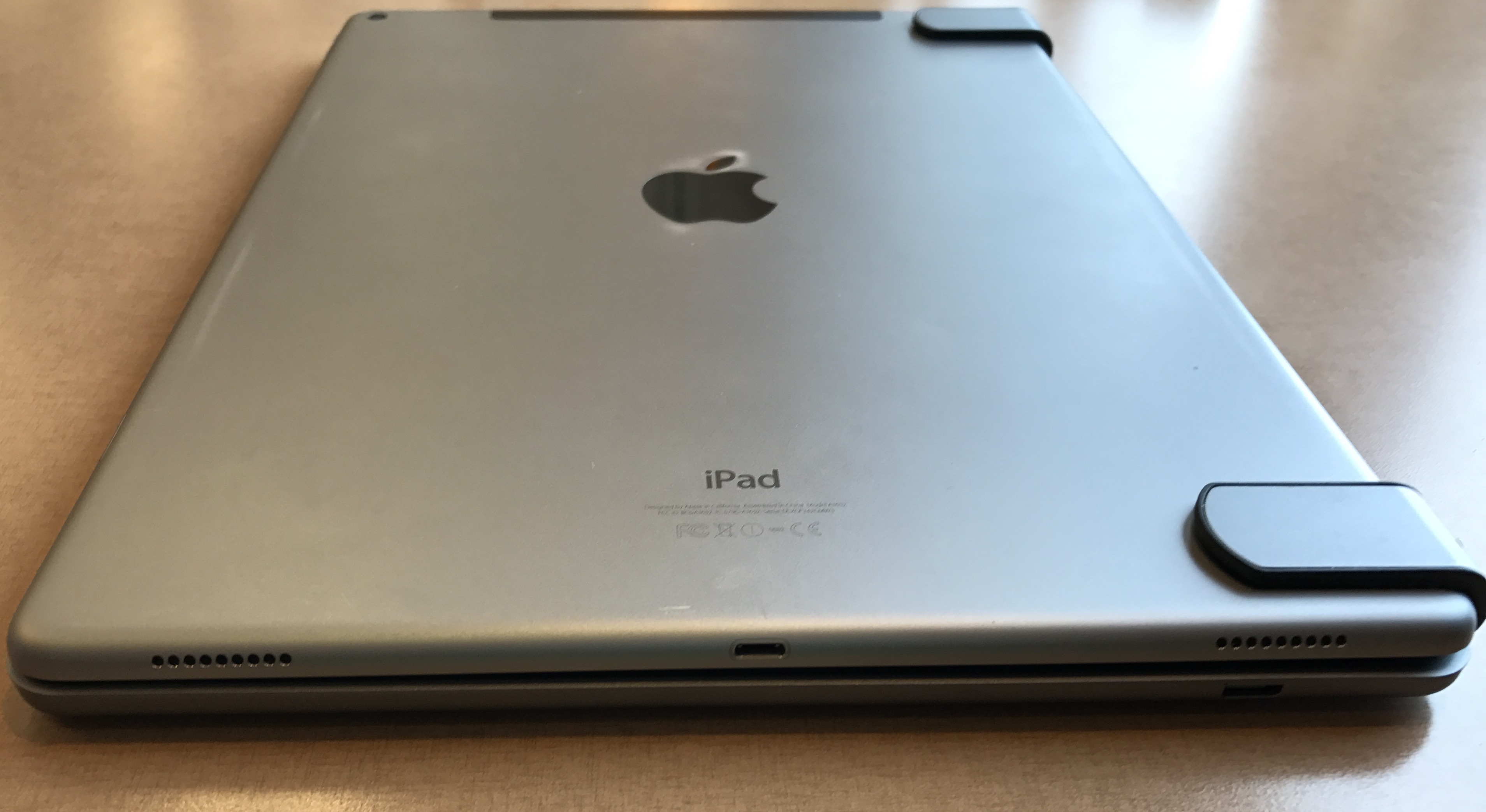 How well does the Brydge Keyboard work as a keyboard and as an iPad cover? It’s one of the best keyboards for the iPad Pro available. If it connected via the Smart Connector on the edge of the iPad, it would absolutely beat the other iPad Pro keyboards. The Apple Smart Keyboard or the Logitech Create Keyboard connect easily and don’t need recharging or Bluetooth. However, the Brydge Keyboard typing experience beats both of those. It’s more comfortable and the keys react to fast touch typing better than either of those keyboards.

The keyboard will cover the iPad Pro screen, but it’s not as good a cover as some other solutions. It’s thicker and heavier than the Apple Smart Keyboard or Cover. It doesn’t protect the back and makes it hard to use most protective iPad back covers. I own a SwitchEasy CoverBuddy plastic back cover that houses the Apple Pencil and it doesn’t fit with the Brydge Keyboard installed. Brydge does offer protective backs that fit with the keyboard, but only for the iPad Air 2, iPad Air, or iPad mini. 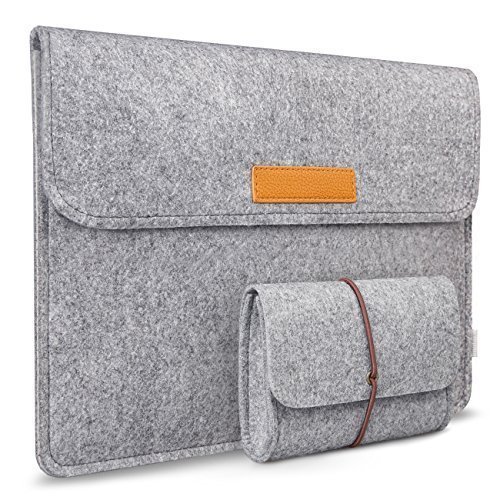 Users will want to protect their iPad Pro with the Brydge Keyboard using a good iPad Pro sleeve that’s loose enough to fit both the keyboard and the iPad. Consider the iPad SleeveCase from WaterField Designs for a high-end option. If you want something inexpensive and basic, look at the Inateck iPad Pro 12.9-inch Case for only $14 on Amazon. The company also makes a number of cases and accessories like the Brydge 12.9 Leather Case comes in black and cost $99. 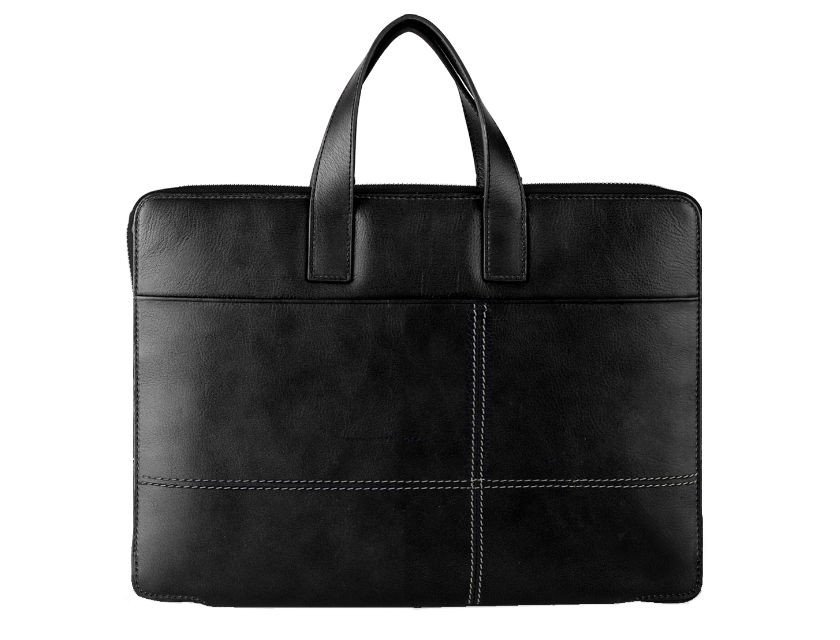 Hardcore writers who frequently use their iPad for writing will love the Brydge Keyboard for the iPad Pro 12.9-inch. It looks great and matches the colors of the iPad. Typing feels comfortable and fast typists won’t need to slow down on the keyboard. 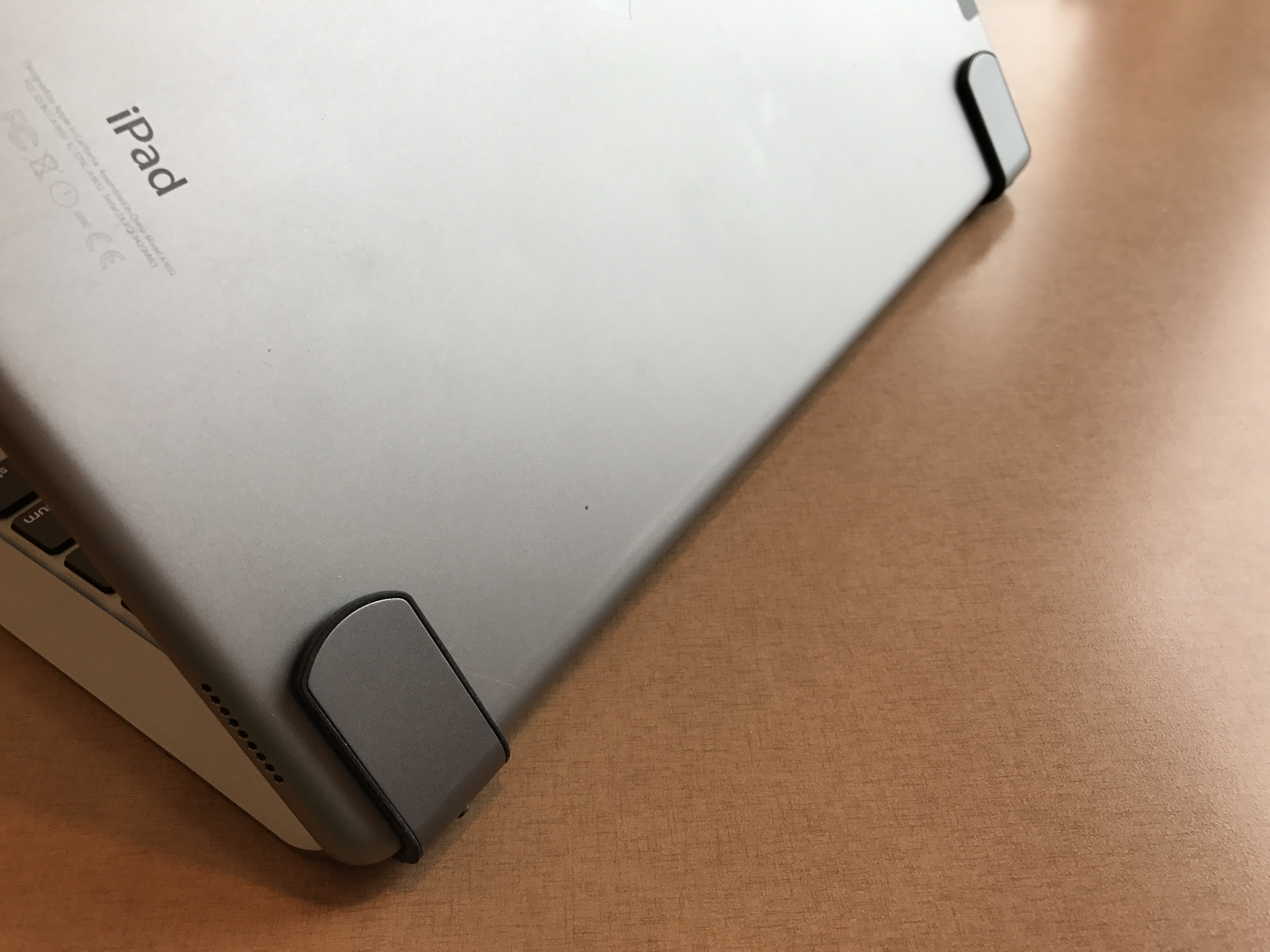 Potential buyers should consider a few drawbacks that I think are minor, but some might see as show stoppers. First, the 12.9 version costs $189.99. That’s a lot of money for a keyboard, especially considering that if Apple changes the design and the user upgrades to the next version of the iPad Pro, the keyboard might become obsolete. Second, a Bluetooth connection isn’t as convenient as the Smart Connector that comes with other keyboards for the iPad Pro. Finally, if you hate carrying the iPad in a bag or sleeve, but still want your $1,000 iPad and keyboard combo protected, you’re out of luck. Unless Brydge designs a back cover to fit with the keyboard attached, you have to carry it bare or put it in a bag or sleeve.

Since the above issues seem small to me, I call this one a buy. The cost is worth the price because the Brydge Keyboard delivers the best iPad Pro typing experience on the market for serious writers.