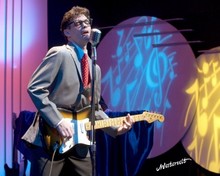 If you’ve followed any of my blogging  about Tablet PCs and UMPCs you know that my primary reason for using a Tablet PC is in my work as a theatre producer, director, and playwright at Wayside Theatre, where I serve as the Artistic Director. Sunday night we opened Buddy, The Buddy Holly Story, a tribute to the young rock and roller killed in an airplane crash on Feb 3, 1959. (You know the song lyric, The Day The Music Died.)

I’ve chronicled my process of using Tablet PCs in several series of posts (you can find them here, here and here.) But, for this show I went exclusively Ultra-Mobile PC. The goal was to see if the smaller mobile device would serve my needs. I picked up an Asus R2H back in December and that was my UMPC device for this process.

The bottom line summary is that the R2H does the job just fine, and with a few exceptions, it altered my process very little.

My primary work task is note taking in rehearsal. In the latter stages of the process when we are running the entire show, I  both sit and move around the theatre taking notes on what needs to be altered or changed. I move around to make sure the visual moments work from all angles in the theatre as well as listening to the sound. Sometimes I do so at a relatively quick pace. Tablet PCs have served me very well here in the past, primarily using OneNote 2007 as my note taking software of choice. I was a bit worried about using OneNote 2007 on the R2H because of the screen size and a poorly implemented screen rotation solution. (I’ve talked about that in this post.)

Using the highest resolution option available on the R2H, along with the full screen mode of OneNote 2007, I get as much screen real estate as I can and those concerns were largely put to rest. I’m not thrilled with the fuzzy screen at the higher resolution but it does the job. I did have to scroll more than before, but it was never an issue during this process and using the button controls make that a bit easier. The other big factor in making this kind of note taking (sometimes it can be a bit frantic) is the excellent touchscreen interface on the R2H. I say excellent interface because in a full week of rehearsals I had absolutely zero vectoring or registration issues where my hand or fingers would cause stray ink to spread inadvertently over the screen. This is a very good thing.

My note taking chores in most rehearsals are about 3 to 4 hours at a stretch, occasionally longer. I’m not working with the unit continually, only when things warrant. Using the 4 cell battery on the R2H, I was easily able to get through an entire rehearsal without an issue. I did have wireless and bluetooth radios turned off and the screen dimmed, and of course that does help. On days where we would rehearse both afternoon and evenings, I had the Battery Geek Portable Power Station at the ready and would charge up during a meal break. Using both the 4 cell battery and “the geek” I had no power issues whatsoever. In either case, sleep or suspend is my friend. I have discovered a weird anomaly though that happens randomly when I wake the unit up from a suspend state. The R2H will come back to life with the shift keys locked down, necessitating using the on-screen keyboard or the TIP to change that state. Weird as there is no rhyme or reason as to why this occurs.

I do a lot of research for any show, but when your are doing a show about a historical and very well known figure you need to intensify that a bit. We downloaded any song by Buddy Holly to capture the exact style. We also took a look at any videos we could find to capture his performance style and demeanor. These were easily played back on the R2H when the occasion warranted. As a media device the R2H works like a charm.

Most of the good folk who work with me on a production are used to me pulling out the Tablet PC. But the size of the R2H caught their attention big time. I got more questions about it than I ever did using a Tablet PC.

Worth It or Not?

For my needs the answer is an unequivocal yes. The R2H is very easy to tote around in rehearsal and fills all of my needs in that work environment.  There is nothing I did before in rehearsal with a Tablet PC that I can’t do with the R2H. At the moment I see it becoming my primary rehearsal tool while the Lenovo Thinkpad X60 becomes my workhorse in the office, where occassionaly the processing tasks require a bit more oomph. The only hesitation I have at the moment is the very lousy implementation of the screen rotation. It is just poorly done. By the time I get to the next show, I will have installed Vista on the R2H and decided yea or nay as to whether that will work or not for these needs. Here’s hoping.

The next big R2H test will be at the UPTA Audition Conference in a couple of weeks. We’ll see how that goes using the R2H as a primary work tool.