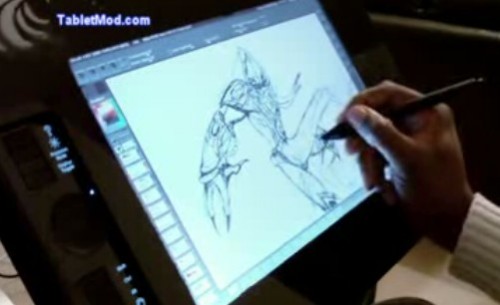 The folks at TabletMod.com have a great URL, but they might be pushing the definition of “DIY” to the edge with their DIY Cintiq proposal. They supply an acrylic enclosure to house your homemade Cintiq and you supply the LCD and fully assembled digitizer to build your own pen input display.

The result looks slick but I don’t know if it’s really DIY. It’s not quite like buying a barebones PC system. Rather, it’s more like an all-in-one desktop case in which you add your own monitor and another PC. Still, the final product looks way prettier than duct taping an LCD between a Wacom pen tablet and a piece of glass.

My big concern would be the pen detection range. Cintiqs and Tablet PC digitizers are designed to have an LCD and screen in the way, but the Intuos and others are not. Hover might be a little tight.