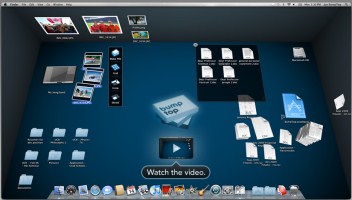 Hmmm… BumpTop, a touch and gesture based interface for working with your computer files, formerly for Windows only, has been released for Mac. Seems to work great via the multi-touch trackpad, as seen in the video demo (after the jump), but I must assume they’re also hoping to get some touchscreen love on an Apple Tablet soon.

Back to the present, the demo looks pretty smooth manipulated via cursor and trackpad. One thing that kind of sticks out at me though, which I hadn’t really noticed previously, is how much it seems like a virtual cubicle. Makes me feel a little claustrophobic. A killer future feature would be the ability to push down those walls, Office Space-style. Put that in the Pro version (which offers multi-touch support and unlimited sticky notes), along with a fax machine to smash and pieces of flair to decorate the cube, and they could make some bucks.