Just how good is the new 8-megapixel iSight camera in the iPhone 5s? It’s good enough to record videos and capture still images of a fashion show for luxury brand Burberry in London thanks to a partnership with Apple that would make late co-founder Steve Jobs proud.

Jobs has stated in the past that Apple is all about the intersection of technology with the liberal arts, and melding the technical capabilities of the iPhone 5s in capturing the artistic creations of Burberry has proven to be a good fit for the two companies as they highlight their respective products while making the gold iPhone 5s a high fashion highlight.

Ahead of commercial availability of the iPhone 5s, which will only begin to be sold to customers starting Friday, September 20th, Burberry had used the iconic Apple flagship smartphone to record the runway of its fashion show as part of the London Fashion Week event. Videos and still images were posted to various Burberry channels, including on social sharing site Instagram.

The highlight of the show was a video that showed off a brand new capability of the camera on the iPhone 5s–capturing slow motion video. Burberry uploaded a video that showed regular motion and slow motion in a short clip, creating a video with a cool effect that will likely impress friends and family when the iSight camera on the iPhone 5s is used at home.

The slow motion video capture mode is unique to the camera on the iPhone 5s along with the new iOS 7 operating system on that phone. The new mid-range iPhone 5c and older iPhone models would not be capable of using this feature or effect.

To record the runway, Burberry used a special ceiling-mounted rig that holds three iPhone 5s units. From photos uploaded by attendees of the show, Burberry had chosen to use the gold-toned iPhone 5s, a new color for Apple’s 2013-2014 lineup. An image of the rig was posted to Reddit by a reader. 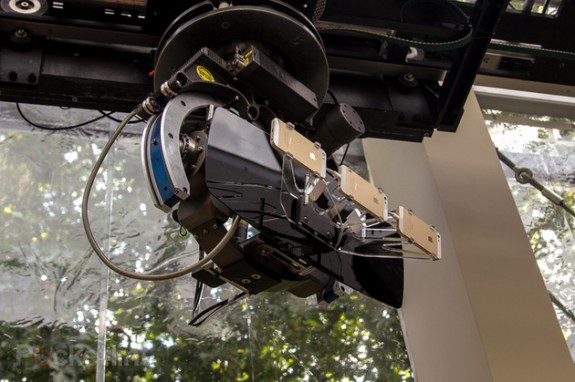 Because of the lack of optical image stabilization on the iPhone 5s–rival smartphones such as the Nokia Lumia 920, HTC One, LG G2, and Nokia Lumia 1020 all have OIS that would allow for more shake-free video recording without a tripod–a mount or rig is required to capture videos without shake.

As was reported on Mashable, the video recording of the entire show is posted below:

Autofocus and the video exposure seem to be good for the video. One professional videographer whom I spoke with said that the dynamic range is poor, but “not as bad as other cheap point-and-shoot” cameras.

It’s still too early to evaluate the still camera performance as images uploaded to Instagram are highly compressed. However, at least one image appears to be good. On the lit runway of the show, the models and falling rose petals were shown to be in motion without any motion blur, demonstrating the faster shutter speed of the iPhone 5s. 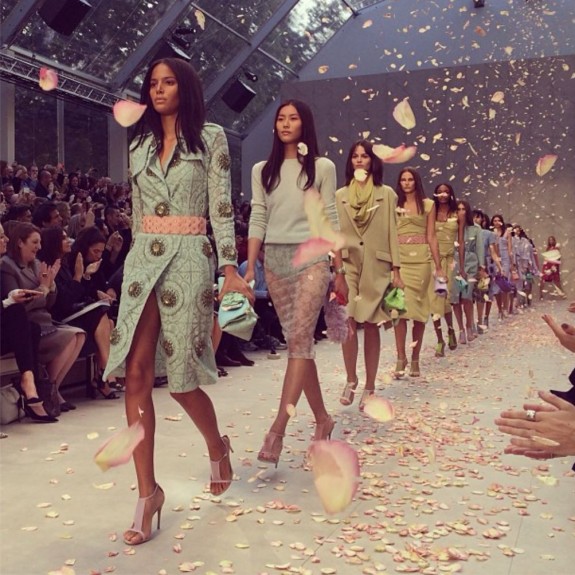 In another photo, the image appears to be grainy and not so sharp. The backstage photo posted to the same photo sharing site shows a model, and likely was captured in lower lighting conditions. In low light without the use of a flash, the limitations of a smaller sized sensor becomes more apparent when compared to shots captured by a DSLR or a camera with a larger sensor, like Nokia’s Lumia 1020–that phone also benefits from optical image stabilization to reduce camera shake when snapping pictures in low light, a feature that the iPhone 5s still lacks and Apple is making due with digital stabilization through software. 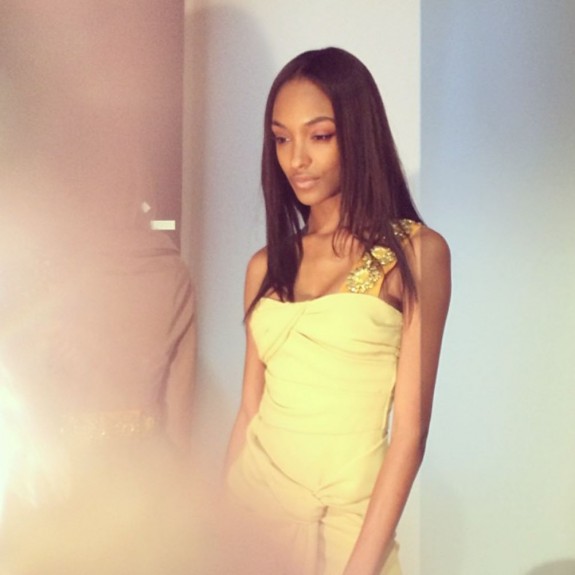 Though on paper, the new camera on the iPhone 5s appears the same as that on the iPhone 4S, the iPhone 5, and the iPhone 5c–all of them have 8-megapixel resolution shooters–the new iSight camera has been improved this time around. A slightly larger sensor, a wider aperture that lets in more light, and the software tweaks will all add up to an overall better user experience for most consumers. And given that the iPhone is already the most popular and widely used photo capture tool today, these little improvements will go a long with for most people.

The partnership with Burberry is the latest marriage with fashion by the tech industry. Designer Diane von Furstenberg had used Google Glass in her fashion show. Google also did a multi-age advertisement in Vogue to highlight the fashion of Google Glass to make the obscure gadget more appealing to fashionistas when it launches next year to consumers. And Apple recently poached a designer from Yves St. Laurent to work on some of its projects, likely on the rumored iWatch.