Ian Sager, of BusinessWeek.com, is a self described longtime admirer of tablet pc technology. In his review of Toshiba’s R400 Tablet PC, he does a very good job of running the R400 through its paces and gives an honest assessment of the Tablet PC. 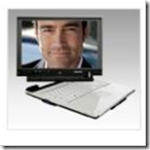 His over all conclusions:

The Bottom Line: Buyers on a budget may want to look elsewhere

So as stylish and capable as the Portege may be, for that price it could stand more razzle-dazzle. If you’re in the market for a tablet PC and don’t have cash to burn, you may want to consider other models.

It is good to see more mainstream journalists picking up tablet pc technology and doing decent reviews of them, while also showing that they know what they are talking about.

BTW: GBM reader elo also picked up an R400 Tablet PC and is offering up his opinions here.