Call of Duty 2014, hasn’t officially been announced yet, but a single image of one of the game’s characters making the rounds today should have gamers excited about the upcoming title.

Gaming website IGN, posted a photo of what looks like a solider in the game, yesterday. As it’s just a single image, the photo doesn’t reveal a lot of details about the plot in the game. We don’t yet know where Call of Duty 2014 is set and how it fits into the franchise’ other story lines. Luckily, it’s Call of Duty 2014, the latest installment of a gaming franchise that almost no one plays for the single player experience.

The Call of Duty series has been all about the multiplayer experience, and to that effect it looks like gamers should be excited for Call of Duty 2014 if for no other reason than it appears it will include a serious graphics upgrade. The photo shows an impressive amount of detail. Though the solider’s  eyes seem a bit glassy, his skin seems perfectly lit to match his surroundings. Even more impressive is the textures used on his lips and skin. 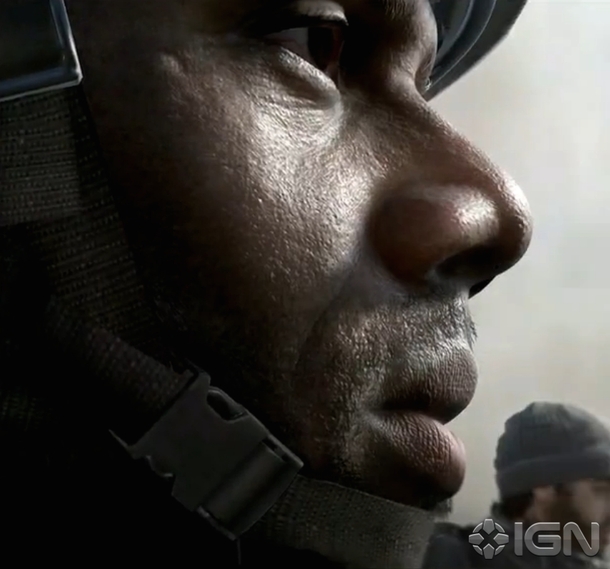 A screenshot of Call of Duty 2014 posted by IGN.

IGN is confirming that this is a picture of an actual in-game character, not a render or a cut-scene that’s been deliberately made to look cinematic and doesn’t take place in the game world. If that’s true, than Call of Duty 2014 is going to be one impressive looking game.

That Call of Duty 2014 would look much better than its predecessors does make sense when you take comments made by the game’s production team into consideration. According to Activison, Call of Duty 2014’s publisher, the game will be “next-gen first.” That’s a bit vague but other developers who’ve used the phrasing to promote their work have used it as a euphemism for making the gameplay and graphics experience of those playing on new consoles like the Xbox One and PS4 a priority.

This means that users on those consoles often see better performance. That being said, that doesn’t mean that Xbox 360 and PS3 users won’t be able to play the game. Putting next-generation console development first may mean that some users are entitled to a better experience, but that is not the only experience to be had, the Xbox 360 and PS3 will still get Call of Duty 2014, even if it doesn’t look as good or perform as well as its counterparts on newer systems.

Respawn Entertainment used a similar approach to develop Titanfall, the first-person shooter that features online-only gameplay and giant mechanized robots that fight alongside soldiers on the ground. So far, it doesn’t seem to have harmed enthusiasm for the Xbox 360 version of the game, despite it arriving a month after the Xbox One version. Respawn actually offloaded development for the Xbox 360 version of the game to another game studio entirely. It’s unclear if Sledgehammer, Call of Duty 2014’s developer has done the same. We do know that Call of Duty 2014 has actually been in development for three years.

Upgraded graphics aside, users excited for the game should also be hoping that Sledgehammer delivers something more than just upgraded graphics. By most accounts, Call of Duty has been a victim of its own success. Record sales and high online activity have led to what’s essentially the same game being sold to users year after year. Last year’s entry even included a cut scene taken straight from a previous installment. Many of the game’s mechanics haven’t been changed in any substantial way since Call of Duty: Modern Warfare.

While that’s not a problem that Call of Duty has a monopoly on, it’s made worse by the game’s release schedule. Since Activision realized it can count on high sales of Call of Duty to bolster its profits it’s released new editions yearly. By comparison, most blockbuster titles, like Halo, only see new console releases every three to four years.

To be clear, Activision hasn’t formally announced when users can expect Call of Duty 2014 to be available on store shelves. In fact, it’s only acknowledgment of the game is not forcing news outlets to remove this picture and announcing who the developer would is. That doesn’t mean we don’t have some rough idea of when it’s arriving. Its unofficial name tells us that it’ll arrive sometime this year, and since new installments in the franchise usually launch in early November, it’s safe to assume that’s when we’ll see Call of Duty 2014 available for users to play.

Presumably, Activision will share more about the game, including its story, weapons line-up, plans for downloadable content and maps during this year’s Electronic Entertainment Expo. E3 2014 kicks off on June 10th from the Los Angeles Convention Center. It’s there that most of the high-profile games coming over the next year will make their debut in splashy key notes and new video trailers.