A 9-minute Call of Duty: Advanced Warfare gameplay video arrived at the Xbox e3 briefing showing gamers what to expect from the new Call of Duty game on Xbox One and PS4 this fall.

Call of Duty: Advanced Warfare delivers a new style of gameplay that looks like a mix of traditional Call of Duty games, with a little Titanfall mixed in and a lot of new looks and interactive environments. It’s clear that this is not Call of Duty: Ghosts, and fans looking for more of a jump should be in for a good time. 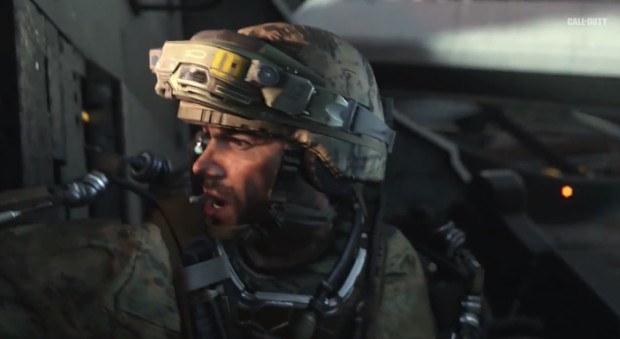 The new Call of Duty: Advanced Warfare lives up to the name with smart grenades, lasers and jetpacks.

Call of Duty: Advanced Warfare is set in South Korea and adds drone control, new weapons and a more interactive experience to the game that could bring some fans back to the series after leaving for KillZone, Titanfall and BattleField, as well as offer something newer than old Halo games on the Xbox One.

This section of Advanced Warfare gameplay leaves Kevin Spacey behind and focuses on a group of U.S. Marines in Seoul, South Korea with, as the name implies, advanced weaponry that ranges from drones and smart grenades to riot shields that offer better cover.

The Call of Duty: Advanced Warfare release is set for November 4th, and while you cannot play the game for several months, you can watch this new trailer to see what to expect and check out the most exciting features we saw in the list below.

Although the description does not say which console this gameplay is from the on-screen controls and the setting show us that it is Call of Duty: Advanced Warfare for Xbox One. Watch this video, which is mostly gameplay to see what to expect this fall.

Many first person shooters clutter the screen with information that users want to know, but it ends up looking like a science fiction game no matter what the setting is. In the Call of Duty: Advanced Warfare gameplay trailer we see a HUD that is integrated into the gun for ammo, grenades and more, instead of cluttering up the display. Hopefully this sticks into the final version. 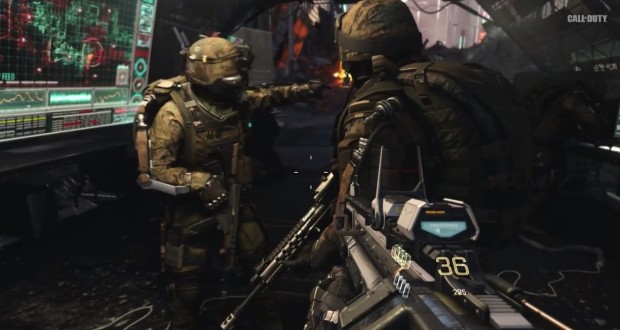 A cleaner screen moves ammo and other details to the weapon.

It’s no surprise that the new Call of Duty looks good, but the fire and explosions on Call of Duty: Advanced Warfare for the Xbox One look amazing. From embers that fly up when a fire is disturbed to major explosions and burning debris it looks awesome.

If you want to jump higher or farther, or ever wished your Call of Duty character was stronger — this is the game for you. Thanks to a booster you can survive drops from very high, as long as you use the jetpack to slow your fall. This can also help you jump farther and up over higher ledges and get a boost on the enemy. With an exoskeleton you soldier is also stronger.

There are many drones in the game, including swarms that can attack you, but you can also take control of a drone and use it to move a shield to keep you protected while fighting. You can also raise and lower the shield for timed shooting to take out the enemy without taking fire. 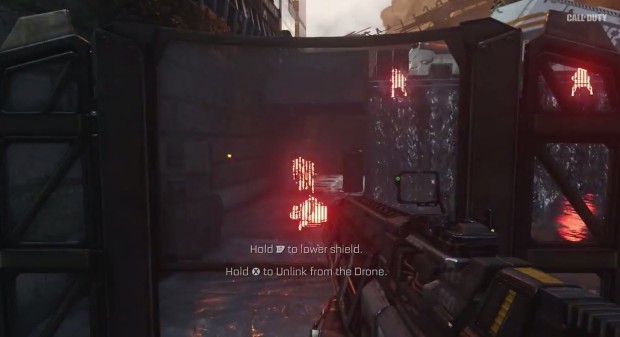 Use a drone, control a shield and fight smarter.

There are more interactive environments, or at least parts of it are. In the new Call of Duty gameplay video you can rip the door off a busted car to use it as a shield from drones. It’s not clear how often you can do this, but we hope it is a regular addition to the story mode.

There’s no doubt that these are exciting new grenade options. 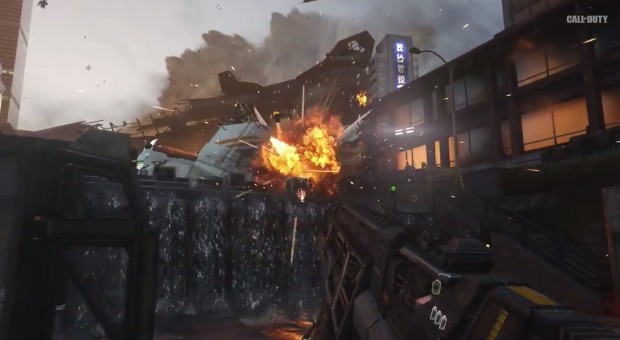 In Call of Duty: Advanced Warfare you get grenades that seek and highlight threats.

In addition to everything above, there are already exciting weapons shown off in the gameplay video. We see an assault rifle of some kind that doesn’t appear to be too special, but when it comes time for close combat the Marine delivers damage with a powerful shotgun and a laser.