Moments ago video game publisher Activision finally revealed he details concerning the special edition versions of Call of Duty: Advanced Warfare it plans to launch alongside the traditional versions of the game later this year.

At $79.99 Call of Duty: Advanced Warfare Atlas Limited Edition is for gamers looking to save a bit of money. It’ll include everything users need to get going. The game itself is packed in with this version, along with a metal case, a physical manual for the game and a digital version of the game’s soundtrack. Atlas Limited buyers will also find codes for two extra weapons and an upgraded exoskeleton for their character. In Call of Duty: Advanced Warfare, exoskeletons are used to provide characters with super human abilities like climbing walls and super strength. Atlas Limited Edition buyers will also get access to an exclusive multiplayer map taken from Call of Duty 4: Modern Warfare’s online offerings. 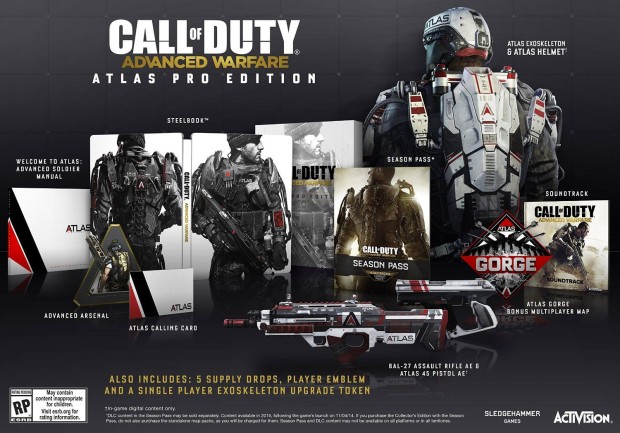 Users who purchase Call of Duty: Advanced Warfare Atlas Pro Edition are in for those exclusives plus more. This edition of the game will include a season pass that grants buyers automatic access to all the game’s four add-ons as they become available in the next year. Anyone set on buying add-on map packs later on will definitely want this version.

Finally, there’s a fourth version of the game that’ll be tailored more to the growing number of users who don’t want to purchase physical copies of games. Dubbed the Call of Duty: Advanced Warfare Digital Pro Edition this version of the game will include access to the aforementioned exclusive multiplayer map from Call of Duty 4, all the game’s forthcoming downloadable content, a unique pistol, a unique rifle, exoskeleton, helmet, player card and an extra token that lets users upgrade their exoskeleton and in-game character with new abilities. Unfortunately, according to One of Swords we don’t yet know how much that will cost.

All told, it’s a somewhat paired down edition of what users have received in past high-end special editions of the video game. In a previous version users actually received a remote control car.

We may now have almost all the information we need about Call of Duty: Advanced Warfare’s different special editions, but we still have yet to see huge chunks of the game itself. Activision is promising a reveal of the game’s online multiplayer elements on August 11th, roughly two-weeks from today. We do know a bit about other aspects of the game.

Call of Duty: Advanced Warfare’s campaign will star actor Kevin Spacey. We don’t know much about the circumstances surrounding the events in the campaign, but clearly Spacey’s character is out to grab power and other nefarious things. This being Call of Duty, there will be guns and grenades. However, users can also look forward to giant lasers, and shields that will follow them will automatically lower to allow them to shoot at other players.

Call of Duty: Advanced Warfare will be available on the Xbox One and PS4 for users who want to experience the game with better graphics. That being said, users don’t have to upgrade to a newer console if they don’t want to. Versions of the game will also be available on the PS3 and Xbox 360.  All versions of the game launch on the same day here in the United States, November 4th.