The developers behind Camera+, my favorite iPhone camera app, are sharing some sales figures and they’re very impressive. Tap tap tap is reporting that it has sold two million copies of Camera+, bringing in over $1.8 million in net sales.

Camera+ is a photo-taking app that is far better than the iPhone’s built-in camera and any other camera app I’ve used. The app’s latest update includes Clarity, a one-tap solution that automatically enhances photos.

As we’ve reported before, iOS users are much more likely  to spend money on apps than Android users. Camera+ is yet another example of an iOS app that is able to support a real business. 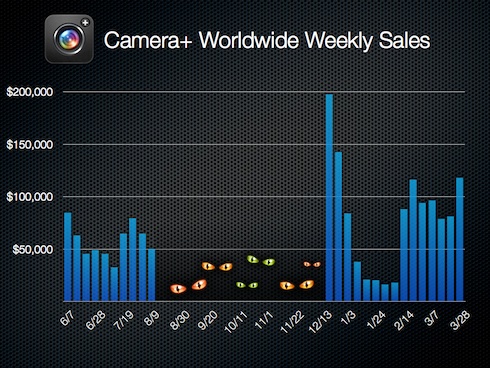 As you can see in the chart above, sales of Camera+ are brisk. At just $.99 per copy, tap tap tap is currently on a 160,000 copies per week pace. The first million or so copies of the app were sold prior to the app being banned from the Apple AppStore back in August due to its volume button snap feature. When it was re-approved in December, people certainly noticed. In the past three months, the second million copies of the app were sold. At its current pace, the third million copies will be sold in 1.5 months.

Tap tap tap sells a filter pack as an in-app purchase, but points out that sales are lackluster compared to overall sales. Only $70,000 worth of the filters have been sold In the past three months.

Camera+ is a gem of an app and I’m sure most active users would be glad to pay more than $.99 for it. But the real story here is that over two million people are willing to pay anything for this app. It’s stories like these that are going to make it so developers continue to develop for iOS first and Android second. Yes, Android is surging past Apple in terms of unit sales, but Apple users don’t seem to mind paying for apps of value.