Samsung is making a smart watch that the company hopes will deliver more than a gimmicky Dick Tracy-like user experience and allow the company to leapfrog Apple’s rumored iWatch.

“We are working very hard to get ready for it. We are preparing products for the future, and the watch is definitely one of them,” Samsung executive Lee Young Hee told Bloomberg.

The interview comes just days after the company launched the Samsung Galaxy S4, a smartphone with the tagline, “Life Companion” and a host of apps and accessories that connect Samsung believes fill voids left by traditional smartphones.

Lee refused to share specific Samsung smart watch features, lest Apple learn what the company is up to, but Lee at least hints at the understanding that to be successful the Samsung smart watch cannot be a novelty item that appeals first to tinkerers, telling Bloomberg, “The issue here is who will first commercialize it so consumers can use it meaningfully.”

Samsung did not offer a name for the company’s iWatch competitor, but it’s fairly safe to assume it will carry a Samsung Galaxy Watch or Samsung S Watch type branding, to build off the popularity of the Galaxy S3, Galaxy Note 2 and the new Galaxy S4. 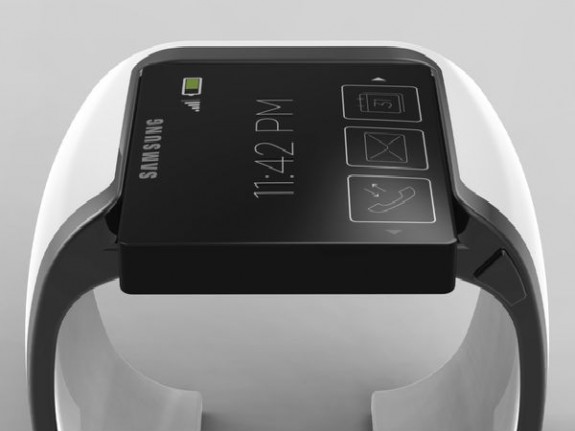 Apple is reportedly working on a smart watch, dubbed the iWatch. Apple reportedly has over 100 employees working on this smart accessory, but we’ve yet to see what Apple is planning, or hear a hint of an iWatch release date.

We’ve already seen several iWatch concepts that show multiple ways Apple could deliver a smart watch that connects to the iPhone. Apple should be able to deliver a more consistent, seamless experience between the iPhone and an iWatch than devices like the Pebble. 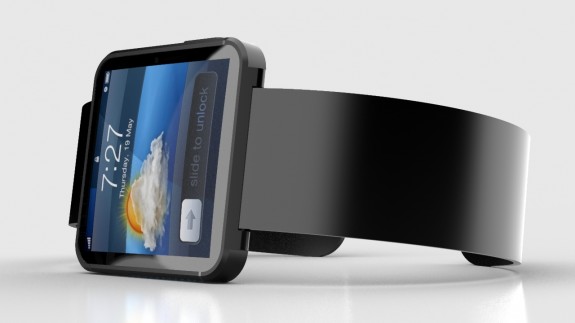 Analysts expect Samsung and Apple to butt heads with wearable technology, just as the iPhone 5 and the Galaxy S4 go head to head for the top smartphone spot. Neither Apple nor Samsung will comment on the timing of a smart watch launch, but rumors indicate Apple is planning to launch an iWatch in 2013 and leaks point to a Samsung smart watch this year as well.

Can Samsung Beat the iWatch?

The iWatch and the Samsung Galaxy Watch could help define a device category that is still in its infancy. We’ve tested various smart watches, including the Pebble and the now defunct WIMM One smart watch. The video below shows how an early smart watch connects to an Android phone and some uses of a smart watch.

Samsung’s continued focus on the various aspects of a user’s life could give the Korean company an edge over Apple. While Apple is known for lovely industrial design and simple user interfaces, Samsung is the company currently pushing the boundaries of what software can do on our devices. Yes, a smart watch needs to look beautiful. Watches are after all a piece of fashion, but it needs to deliver what Lee calls a “meaningful experience.”

This could give Samsung an edge over Apple when it comes to the smart watch race of 2013.

Smart Sensors for a Smarter Watch

Samsung loves to put sensors into their smartphones and accessories, and it’s likely that the Samsung smart watch could make use of the eye tracking and motion gestures of the Samsung Galaxy S4. Forget pushing a button to wake up a watch screen. How about a screen that turns on and shows the time when it detects a wrist movement and your eyes on it? This is the type of thing Samsung is already good at. and would make perfect sense in a smart watch.

The video below shows the smart sensors in action. A similar gesture could turn the screen on and show a user the time.

Smartphone Control from a Smart Watch

In addition to the standard communication functions one would expect from a smart watch, Samsung could pull n the NFC and connectivity features that enable features like Group Play to allow for fast pairing and possibly control of various Samsung devices.

If properly configured, perhaps the Samsung Galaxy Watch could initiate a S Beam, so users could keep their phones in their pockets and tap watches to start sharing a file, photo or contact info.

A Smart Watch With Health at Mind

The Samsung Galaxy S4 S Health app tracks a user’s comfort level, exercise and walking habits, food intake and can even track weight, blood glucose levels, blood pressure and act as a sleep monitor with a number of accessories.

Imagine if the S Band and Heart Rate Monitor strap combine into a smart watch that tracks all of this on your wrist without the need for added accessories.

Ultimately we won’t know what the Samsung Galaxy Watch and the iWatch can do until either company officially announce them, but it’s clear that Samsung and Apple are in for a big fight in the wearables category, one where Samsung may have the edge.