Can High-End BlackBerry 10 Aristo Smartphone Excite When It Launches?

Research in Motion is planning a very high-end BlackBerry smartphone that will run the new BlackBerry 10 operating system. The device, codenamed Aristo, has appeared in a leak detailing many of its specs, which shows that on a hardware level RIM is aiming competitively at flagship and high-end multi-core Android smartphones running Google’s mobile operating system.

Like the L Series phones and the developer slate-style smartphone that RIM has been propagating at its developer events including BlackBerry Jam North America, Aristo appears to be a touchscreen-only device.

According to GSM Arena, the device will feature a 4.65-inch HD OLED display made with “OCTA Glass made by Samsung, which eliminates an additional touch screen layer and integrates the touch sensor directly onto the AMOLED panel instead.” Essentially, this will improve the brightness, reduce the thickness, and help to eliminate glare; the technology is a similar thing to the Apple iPhone 5’s in-cell display. The 4.65-inch HD resolution display would place the Aristo’s screen with the same dimensions as Samsung’s Galaxy Nexus. 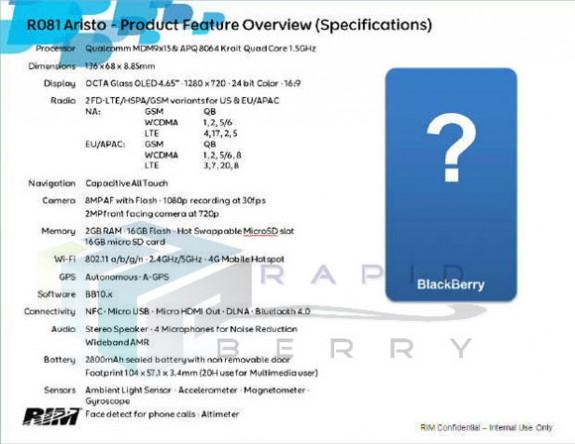 The device will feature an 8-megapixel rear camera capable of 1080p HD video capture at 30 frames per second as well as a front-facing 2-megapixel camera. It will measure 8.85-mm in thickness and will come with NFC, Bluetooth 4.0, WiFi Direct support with DLNA, and micro HDMI output. The device will have 16 GB of on-board storage, a quad-core Snapdragon S4 Pro processor, 2 GB RAM, and a hefty 2800 mAh battery to take on the likes of Motorola’s long-lasting Droid RAZR Maxx series and provide ample juice for heavy multitaskers.

While on the surface, the specs are indeed competitive with the highest-end Android devices on the market today, RIM will have a lot to prove. It’s BlackBerry PlayBook did not fare well in the tablet market and the aging BlackBerry 7 OS on current phones have not drawn in as much excitement as in the past. The market is competitive and RIM will not only need competitive hardware, but a strong ecosystem supporting apps, content (videos, mudc, TV shows, movies), digital books and magazines, and provide a strong balance for work and play. Until that happens, it may be hard to recommend a RIM smartphone to consumers, who are increasingly using a single smartphone for both home and work lives.

With the consumerization of IT, RIM will need to go after consumers to persuade their employers to continue to support its smartphones. The most notable company that has dropped RIM’s devices recently is Yahoo, which is focusing its corporate devices on Android and iOS.