The iPad is the dominate tablet on the market today, so much so that when I even try to show off Android tablets, people often give me a weird look.

The Kindle Fire may be aimed at beating the Nook Color, but it is also drawing comparisons to the iPad, as many consumers want to know which is better. Forget the Kindle Fire vs. iPad comparisons, and feast your eyes on the latest tablet to hit the market.

The Pyramid is a new tablet that reinvents the tablet experience, bringing the “Power of the Pyramid” to your hands.

Check out the following Hands on with the Dunder Mifflin Pyramid Tablet: 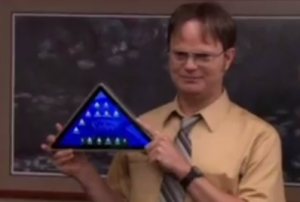 Can the Sabre Pyramid Tablet beat the iPad?

The Sabre Pyramid weighs about 3 pounds without the battery and memory booster. Without these add ons you get 50L of memory, so take Dwight’s advice and pick up the memory booster.

A leak from the Boxxcon factory tells us that you will be able to combine 4 Pyramid Pads together for a square viewing surface when need be, but this may not come until the Pyramid 5 arrives.

Yes, this is a fictional tablet, but it does remind me of the current iPad competition landscape. Too often we see products announced that tout specs, features and taglines that don’t reflect what consumers really want.

We haven’t seen anything as bad as a pyramid shaped tablet, but there are still plenty of Android tablet launches that leave us scratching our heads.

I’m sure if you walked into Best Buy or Staples and asked one of the associates responsible for selling tablets, he or she would echo Stanley’s questioning, “How on earth are we supposed to sell…” that.

From what I am told, there will be 100 apps at launch, sadly the pyramid shape makes it difficult to port iPad apps over to the device. The Pyramid may soon run WebOS if licensing deals go through. Word on the street is that Microsoft has already dispatched lawyers to Dunder Mifflin to seek a portion of every Pyramid sold.