According to Cult of Mac, Two Lives Left created Cargo-Bot entirely within Codea, another iPad app. Codea is a $10 iPad app that helps potential developers create their own apps. Codea uses the Lua programming language for apps, which are then run inside the Codea environment.

Two Lives Left was able to put Cargo-Bot in the App Store thanks to an Xcode template tool. The template tool is still unreleased, but other developers will soon be able to use it to create their own games on the iPad. Those developers will still need to pay Apple the $99 a year for a developer’s license, but they won’t need to learn how to use Xcode to create games.

Cargo-Bot looks impressive for a game developed entirely on the iPad. The graphics are somewhat simple, but look nice, and the game is fun to play. It’s certainly better than some traditionally developed games. 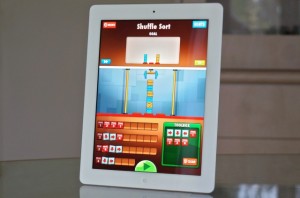 This game is proof that developers can use the iPad to create apps, which is great for first-time developers. It’s doubtful that an app like Codea will let developers create games on par with Infinity Blade or Max Payne anytime soon, though. Complicated 3D games like those need a more traditional coding environment, and probably will for a long time to come.

There is a possibility that Codea will result in more mediocre or bad games on the iPad, but there’s always that risk in app development.