You knew it was coming. Or at least you should have known. It appears Google is bowing to carrier demands and removing Apps from the Marketplace that allow you to tether that smartphone up to other devices. You can still tether using carrier plans, but there’s no more free ride. According to reports, if you go to install one of the Apps you’ll get a “not available on your carrier” message. Apparently Sprint hasn’t flipped the switch on this yet but T-Mobile, AT&T and Verizon have.

Like I said, we’ve all known this was coming. 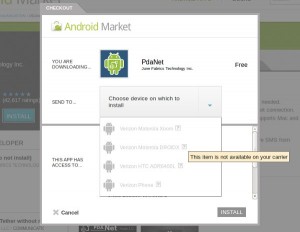