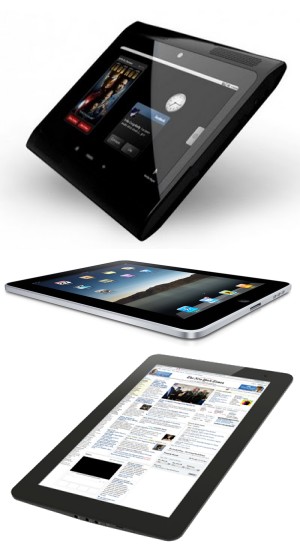 Ben at Carrypad puts the “Top 3 Big Slate Contenders” on the scales, weighing the iPad against the JooJoo and Notion Ink Adam. Seems to be a fair contest, in terms of tech. In terms of sales, well, let’s face it, there isn’t a slate out there that will compete with the iPad.

I think it’s fair to assume the JooJoo’s legal woes will be elephants tromping around the cargo hold of its ship. Maybe not enough to sink it outright, but all that heavy, shifting weight will keep it from sailing straight. Ben worries about the whiffs of vapor the Adam is giving off. Seems a valid concern, but I find it more likely that they’re promising too much, setting themselves up for a backlash of disappointment.

Regardless, the big deficit these and all other slates face when compared to the iPad is lack of hands-on, in-store interaction. We’ve been saying it for years: people won’t buy tablets if they can’t get their hands on them. There are exceptions to that rule (like me), but the ability to handle an iPad in the Apple Store (and presumably later in a Best Buy) is a monstrous advantage, especially given the openness of their display area vs. the locked-down approach of other retailers. In that regard, no other slate even comes close.