Announced earlier this year, Casio is now making its G-Shock smartwatch, which pairs over Bluetooth 4.0 to your iPhone 4S or iPhone 5, available through its website and at select department stores in the U.S., including Macy’s and Bloomingdales. The watch will alert you of incoming calls and messages and comes with a phone finder, for those who tend to wander off and away from their phones and realize later that their phone is now missing. Additionally, the watch will also automatically update the time based on the time on your phone, which is great for time zone hoppers. 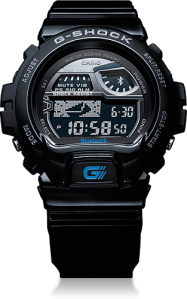 As the Casio watch is G-Shock branded, it should be a rugged watch. The device is water-resistant and the internal battery can last up to two years with 12 hours daily of Bluetooth synchronization between the watch and the phone.

Based on Casio’s promo video detailing the features, it looks like the smartwatch offers more limited capabilities than competing smartwatches for Android from Sony or Motorola. The MOTOACTV and Sony Smart Watch, for example, both offer message previews and show the caller ID information. Casio’s version does not show caller ID name or number for phone calls and it seems it shows the sender name/info for the messaging info. Essentially, even if you don’t need to respond to these alerts, you’ll still need to grab your phone to see what these alerts are. The upside is that the battery life on the G-Shock outlasts the Sony or Motorola editions–the Android smartwatches require nightly recharges.

Casio’s accessory will not only have to compete against these other smartwatches when it launches, but also against other fitness accessories as well that are fighting for your wrist space.