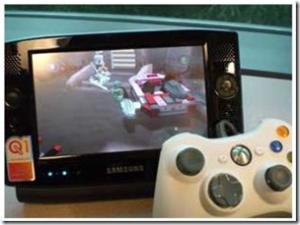 At the Game Developer Conference in San Francisco, Microsoft is demoing Lego Star Wars II running on a Samsung Q1 using an Xbox 360 Controller, and touting the UMPC as a legitimate casual gaming platform.

I definitely see my son using a UMPC for that purpose, but the Xbox controller buttons would need to be embedded in to the casing for it to really take off in my opinion. For example, I wouldn’t see him taking the controller along if he wanted to play Lego Star Wars II in the car or something. that would mean he would need to find a table or something. Part of the handheld gaming draw is the pickup and play anywhere / anytime aspect. That said, I think the platform holds promise for the area.

Anybody out there playing games or planning on developing casual games for the UMPC?