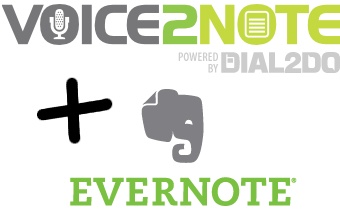 As you may recall but probably forgot, I was evaluating Voice2Note, an audio note transcription service by Dial2Do that works in Evernote. My live evaluation concluded a few weeks ago, and now, finally, here’s my wrap-up.

First, my apologies for the delay on this. I hate to say a bunch of stuff came up, but they did and I’ve been playing catch-up on a couple of fronts.

To recap, Voice2Note transcribes audio notes saved in Evernote to text. The primary methods of recording these audio notes are through the Evernote mobile app or by calling in to V2N’s phone number. Further testing shows that it also works on audio clips in WAV or MP3 format saved to Evernote, so use either of those formats if you save audio notes from your PC. AAC/M4A format is not accepted, so no mailing in voice memos from your iPhone.

Length of the transcription is limited to 30 seconds, so it’s not a full dictation service. Rather, it should be considered an enhancement that makes audio notes more searchable in Evernote. If you have a longer note, only the first 30 seconds will be transcribed, so mention any key terms first.

With that in mind, I found the service to be effective, but not compelling enough that I’m adding voice notes to my regular note-keeping routine. Accuracy was not flawless but high enough for me to find notes. The results of the live test are still online at the public notebook I set up.

Transcription accuracy between recording with the mobile app and phoning it in was markedly in favor of the app. However, phoning in notes has the advantage of automatically generating a note title from the first few words. Furthermore, phone notes are automatically tagged with “voice2note” (premium service only). Tagging was not useful for the evaluation since I set aside a dedicated notebook, but it should be more effective for regular use. Another plus for using the mobile app is that it automatically geotags notes, so you can search by location.

I encountered one note, recorded well into my evaluation, that did not get transcribed at all. Also, while Voice2Note recognized my wife’s name, it was transcribed using a different spelling. This is a problem for Evernote’s verbatim text search, but the notes are editable, so you can correct transcriptions as needed. While calling the number is generally faster than getting into Evernote to record a voice note, the delay in starting the phone recording, which is like leaving a voice mail, almost cancels out the difference.

Despite the imperfections, the service impressed me, and I will definitely continue to use it as a Basic user. Under normal circumstance, I do not exceed the five note a month limit on Basic and do not need immediate transcription, so Premium isn’t worth it to me. If you’re even a little interested, I recommend giving Basic a try. It’s free and you can unsubscribe at any time with all your notes still in Evernote.

The Premium service, which is $2.99 a month or $29.99 a year, is really geared for the power user or, more realistically, for short-term heavy usage. If you’re going to be dumping a lot of voice notes into Evernote for a month or less, paying $3 for Voice2Note during that period is a good deal. I appreciate that Voice2Note offers a monthly option, making it easy to upgrade as needed, like the next time I think I’ll try to get into voice blogging again.