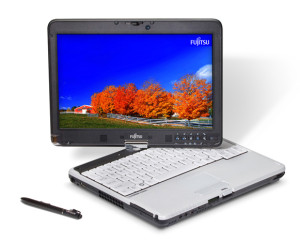 This is a bit embarassing, but we seem to have missed the official launch of the T4310 and T4410 Lifebook Tablet PCs from Fujitsu. We were on the ball when they debuted at IFA, even catching the video demo, and our sister site, Notebooks.com, delivered a wonderful summation. But we missed the launch, so I’m here to make it up to you with a big coverage catch-up that ties together a detailed review, a touchscreen shoot-out, and some new tidbits.

Business or pleasure, both are premium level machines. When they launched recently in Taiwan, Fujitsu “emphasized the T4310’s high quality and specifications” to justify the price, even though it starts quite low compared to other business-class Tablet PCs. The T4310 starts at $1099 with rebate. The T4410 starts at $1299, but a pen-only configuration will be available next month for $1199.

LAPTOP Magazine put the T4410 through the paces, including checking the tablet and multi-touch performance with favorable results.

The display responded smoothly to all of our gestures, such as zooming in on Web pages in Internet Explorer or rotating photos in Windows Photo Viewer; we never felt that we had to practice these motions to get them right. We enjoyed the touch experience much more than we did with the Latitude XT2, a more expensive tablet whose display demanded a bit of practice before we mastered controlling it.

Computerworld also gave the T4410 a run-through, pitting its touch experience against two other contenders.

The system comes with a handy pen that has a digital eraser, a nice touch that’s absent on the tx2z’s stylus. And regardless of whether you’re using a finger or the pen, the LifeBook’s multitouch action is smooth and accurate. It worked well just as well sketching something as zooming in on a Web page.

No surprise the model is getting favorable reviews; we hear almost nothing but praise for Fujitsu’s Lifebooks. If you have one, we’d love to read your comments on it, good or ill.