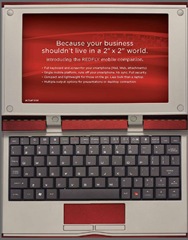 I reviewed the REDFLY from Celio Corporation a few months ago, and while I really like the device, the price was a bit high for most folks. Apparently they heard the call for lower prices. Until Oct 31, you can get a REDFLY for only $199.  That’s a great deal for this device. They’ve been adding to the list of supported smartphones and a large number of Windows Mobile phones are now supported. Still no iPhone support, though, so I’m out of luck, but they do support the HP 910 that I reviewed a couple of months ago.

At this price, the REDFLY slides in under the pricing for netbooks, which is a strategic necessity I think. Given that the device doesn’t include any of the stand-alone processing power of a netbook, I think the general expectation is that it ought to cost less. Let’s see how this promotion at $199 effects sales.