Virginia just experienced a 5.9Magnitude earthquake which was felt throughout the East Coast up through New York and over into Ohio. Several of our writers experienced the quake in a multitude of ways. After the shaking died down, there was a common topic among our Twitter followers — the failure of cell networks.

We don’t know if there is significant cell infrastructure damage, but based on early reports the jammed cell phone networks are tied to overloaded systems, not toppled towers and power outages.

The reports on Twitter cover all major carriers and point to a slow return to normal. The cell service will likely take ups and downs throughout the rest of the day as cell phone users on the East Coast continue to make more calls than normal.

So far we have reports that Sprint, Verizon, AT&T and T-Mobile are all experiencing service disruptions.

Sprint posted the following update to their Twitter page;

Customers in East may experience intermittent delay making/receiving calls after recent earthquake. This is a temporary mass calling event.

Seeing no reports of damage to our wireless network. There was some network congestion in the East after tremors. Continuing to monitor.

Other carrier haven’t share an update yet, but the consensus is that things will return to normal as call volume decreases.

How to Stay In Touch After an Emergency 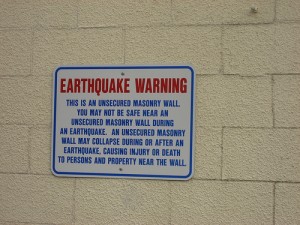 As soon as a major event, like the earthquake on the East Coast, is over there is a natural desire to reach out to friends and family members. Because of this mass desire cell networks fail, much like they do at major events. In order to get around these failures, there are some things you can do.

Text – Sending a text message is much less taxing on the cell phone network, and can be accomplished even when the voice network is essentially out of commission. Instead of trying to call everyone you know to check on their well-being, send a group text message. This will likely reach the recipients faster and should work when you are unable to make a call.

Text Apps – If you have zero cell service, you can connect to a WiFi connection and use one of these texting apps to send text messages to your friends and family to let them know that you are ok.

Email – If you don’t have access to the cell network, turn on WiFi on your iPhone or Android device and connect to an open hotspot nearby. Look for a coffee shop or library and get online. Many users are reporting that the WiFi networks and hardwired connections are still up and as fast as ever along the East Coast.

Skype and WiFi Calling Apps – If you use Skype or another calling app on your smartphone or tablet, connect to WiFi and make a call over WiFi. These apps should work for calling friends and family, but keep in mind most of them do not recommend that you use them for emergency calls.

Do you have another method for staying in touch after an emergency? If so, please share them in the comments below.

Stay safe out there.