Look who showed up at the BlogHaus. Daniel Gentleman, otherwise known as ThoughtFix. He’s sitting to my right and waxing eloquently about his hacked up Asus EeePC, blogging, and all sorts of other topics. 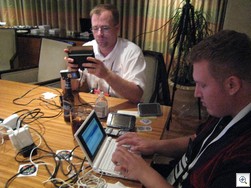 Speaking of the Asus Eee PC it is one of the talks of this year’s CES on many levels. Heck, even elsewhere it is quite the head turner. My wife (who is back in Chicago) was sitting in a Whole Foods checking her email on the Asus EeePC. (Her Dad still doens’t believe in Broadband.) She emailed me to say that a quite a few folks stopped by asking her about the device and where to get one. Asus is on to something.

Back at the BlogHaus and Thoughtfix, Dan the Man video streamed me giving BlogHaus impressario Robert Scoble his first ever splotch. You can watch it at this link. 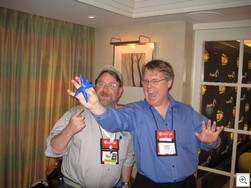