Sierra and I spent some time at the Microsoft booth at the Convention Center and one of the things we found there was a nice display of Motion Computing’s Tablet PCs. The M1700 and the C5 were both on display. This was the first time I’ve gone hands on with the C5 and boy was that a delight. While this slate Tablet PC is aimed at the medical market, I’m really glad to hear that Motion is wide open to other markets as well. The reason? I know this Tablet PC can work well in my work in the theatre. 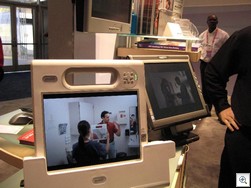 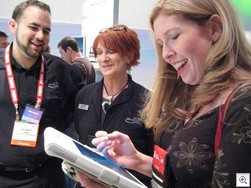 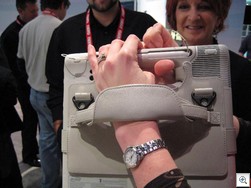 Another interesting feature of the C5 that was on display is the intriguing hand strap for the Motion C5. Later, at the Tablet PC/UMPC Meetup, Motion CEO Scott Eckert told me that this unqiue handstrap came from a user’s suggestion. By the way, Rob will be posting up a fantastic interview with Scott, and John Doherty, one of the co-founders of Motion Computing, who also is one of the original designers of the M1200 and M1300 series of Motion Tablet PCs. You won’t want to miss that one. Stay tuned.