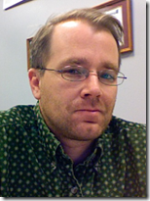 Every year I attend CES, I learn some things to help in next year’s coverage. This year was no different. As a team, we definitely learned some things last year that impacted how we approached CES this year.  On the whole, I believe we were quite successful. There are definite areas for improvement, but I couldn’t be happier with what we did, how we did it, and what we did it with.

Here is a list, in no particular, of the successes and challenges I faced. Other GBM staff members will be doing the same, and you can expect their lists to be different from mine. It is worth noting that even though OQO sponsored our CES coverage and provided 2 Model 02’s for our team to use during the event, we’ll be honest in our use of the devices.

I’ll post more thoughts as the week goes on. Right now,  I’m enjoying being home with my kids, recovering from being sick, and watching Seattle and Green Bay battle it out. Go Favre!