Looks like the Origami Team just released the Origami Experience 2.0 according to the Origami Project.com. Their are four applications in 2.0. 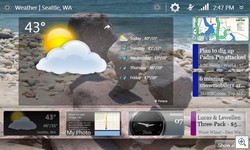 No link available on OrgiamiProject.com for downloading yet, but we’ll update this post when it is available. Perhaps we’ll see more of this at the Tablet PC/UMPC Meetup tomorrow.