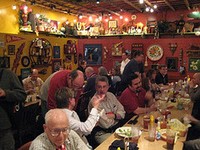 The CES 2008 Tablet PC/UMPC Meetup was an amazing success. The count was 102+, so I’ve been told. The passion for Tablet PCs and UMPCs was obvious and almost overwhelming (or so said a first few timers.)The generosity from OEMs including Lenovo, HP, Motion Computing, TabletKiosk, Fujitsu, ProClip, Otterbox, TechSmith, IT Cases, and sponsors such as jkOnTheRun, Microsoft, Tablet Lawyer, and MobileDemand, was greatly appreciated by all. Four Tablet PCs/UMPCs were given away including the HP TX2000, A Lenovo ThinkPad X61, a Motion Computing Tablet PC of your choice, and a Fujitsu U810 UMPC. 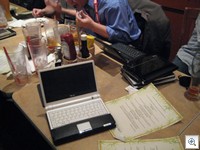 In addition to the giveaways there were a number of Tablet PCs and UMPCs present for the event that folks brought with them, and also a few new devices that are currently on display at CES 2008 made the event as well.

Lora Heiny did a wonderful job pulling this all together with assistance from quite a few folks in the community. All in all it was the place to be for info, viewing and talking Tablet PCs, good food, and good fun. All of us on the GBM Team were really touched and really grateful for all the wonderful comments that people took the time to come up and tell us about how much they appreciate the work (actually it is fun) on GBM.

We’ve got a running stream of photos on this Flickr feed (we’ll be adding more) that you can check out, and if you recognizie youself in a picture leave a comment with your name and the photo number here on this post and we’ll get it added in on the feed. 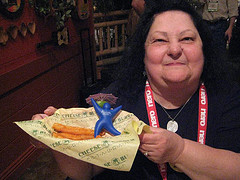 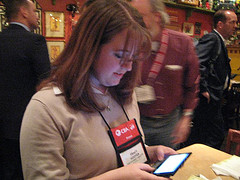 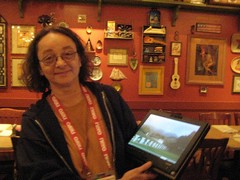