Now the speculation stops and the real fun begins. Tonight was the Digital Experience show where tons of exhibitors show their wares before the CES 2008 floor opens tomorrow morning. More gadgets, more gear, more geeks, more food, and more booze than you can shake a stick at. While Rob was live blogging the Bill Gates Keynote, I headed over for an early start at the show and got an eye and ear full. The next several posts will bring some pictures of the HTC Shift, the Samsung Q1 Ultra Premium, the Lenovo Idea Pad, a handful of MIDs, and a few more goodies. Rob and Sierra are still at the Digital Experience so I’m sure they will have more to come as well. Later on tonight or early tomorrow morning we’ll be posting up video of the aforementioned. And of course we’ll be trying to get a bit more in depth as CES 2008 kicks off in the morning. 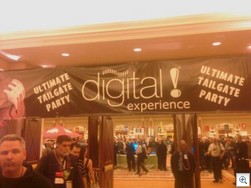