Apologies to Nelson Algren for morphing the title.

For what it is worth here are some of my thoughts and impressions on CES 2008. Insane. Fun. Exhilarating. Enlightening. Frustrating. Confusion. Stupid. Big Gambles. In the end not as much substance as I would have liked to see. That’s how I’d quickly characterize this year’s CES 2008 from my perspective. Here are some extensions on those thoughts.

The definition of insanity is pursuing the same path hoping for a different result. Lots of that happens at CES no matter your perspective. Everyone is hoping their product catches everyone’s imagination, every writer/podcaster/video blogger hopes they find it first. This year’s CES was largely a rehash of things we already knew about, technologies that we already are working with, and dressing those things up as something new and exciting. When there was something new (MIDs) we got to see prototypes of promises yet to come. When you do get a chance to talk with someone about something that is exciting and still to come, it is so far off that you can’t talk about it. With all of that insanity would I do it again? You bet. Call me insane. 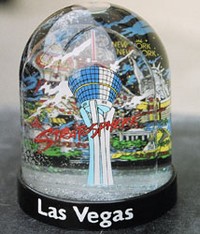 It is a gas to be in the mix and swirl of the whole thing. At times it is like being in a giant snowglobe that is continually being shaken. The camaraderie is well worth the trip, as is the shared conversation. Comparing notes on what you’re doing, and with what technology, is both comforting and inspiring. This year we spent a good deal of time at the Seagate and PodTech sponsored BlogHaus where Robert Scoble holds court. Anytime you can have oysters on the half shell, beer, and blogging, you’re in heaven. We got to meet and hang out with quite a few compatriots in the tech blogging game (David Speiser, the gang from GearLive, Thoughtfix, Jeff Sandquist, Ian Dixon, Steve Hughes, along with many others) and a few luminaries to boot (Scoble, John Furrier, Marc Canter, Doc Searls.) Watching Matt Faulkner and Jason Calacanis share pictures of English bulldogs was a hoot. Sharing gadgets and accessories (anyone have a tripod I can borrow? An SD card reader? A USB to mini-USB adapter?) We had some fun running our online chat on Wednesday and really enjoyed the razing and support from GBM readers while doing that. Some more highlights of the fun:

In the Tablet PC/UMPC space there wasn’t much new to see. But there were some winners here.

I’ve already written some on this as have others. Everything is going to be called an Ultra-Mobile PC in the time ahead. Consumer confusion will happen. Unless someone spends some real bucks on marketing and explaining what makes their product different the whole mobile space will be a muddled mess. If I had to make a bet today, I’d say there is going to be the iPhone and then everything else.

Dell. I don’t buy that the company line that CES is a consumer show and so we aren’t showing our new award winning Enterprise Tablet PC for the consumer market. Short sighted and cutting your own nose off with a table saw. Like that goofy shirt was aimed at the pinstripe crowd. Give me a break.

The talk of the show ran on two tracks. WiMax and Media. The two are inextricably tied together.

You don’t get much substance when you go to the circus and that’s what CES is. But we do hope we come out with something that will help us help our readers understand the new ideas and technologies that will be coming down the road. My big hope was for some substance about MIDs. I didn’t really get it in several good conversations. Talking points, yes. Substance, no.

The mobile device most talked about at the show: Asus Eee PC. Those who have it, love it. Those who don’t are really intrigued.

More later as it comes.