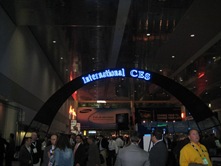 In the hotels of Las Vegas day blends into night so summing up one day is almost a pointless exercise, especially when we’ve still got video and pictures from Day 1 on the floor that we’ll post up tomorrow which should be Day 2, but might be Day 4. You might need to be here to follow that, but just go with the flow. Today was officially the opening of CES 2009. By most accounts it is a down year, which isn’t surprising given the current economic woes. There are certainly less folks on the floor this year from exhibitors to bloggers to media to buyers to booth babes. Although we did some some Dead TV Zombies and a few surfers. Story of the day though came from a valet at Pieros restaurant who told me that it was a really down year. I asked him why and he pointed to his parking lot that still had spaces at 11am. He says they are usually full by 9:30 or so. (Pictures after the jump.)

On the Tablet PC front it is good to see that Tablet Kiosk, Lenovo, HP, Toshiba, and Fujitsu were showing the colors, albeit most of them with devices we already know about. TabletKiosk is an exception there and Rob had several posts (here, here, here, and here) about what they are bringing to market. We’ll be posting up more on Fujitsu, Toshiba, and Fujitsu later tonight or tomorrow.

On a Netbook front, you can say they are everywhere and you’d be correct. We see them everywhere and not just on display, but being used by bloggers and media types as well as booth personnel. Intel is showing off a range of MIDs but we aren’t seeing anything we haven’t seen before. (Check out posts here and here.)

We got some great video of the PowerMat charging system that has generated a lot of interest. And we also got got some video of the GiiNii small tablet running Google Android. This looks to be a promising device and we’ll be getting up video of that tomorrow.

The big story around the show was Palm’s announcement of the Pre, their attempt at conquering Mount Apple. But with a six month time frame for bringing it to market, things could certainly shift and change around Palm before we even see the device in users hands.

We’ve got lots more coverage with lots more pictures and video coming your way as Day 1 (or is that Day 4) blends into Day 2 and we head back to the floor.