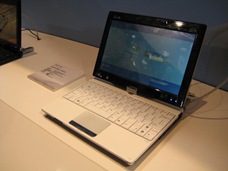 We were genuinely excited about seeing the Asus T91 Tablet with a touch screen and when we hit the booth we found it right away. I don’t want to be too critical here because obviously it is way too early in the game, and this device is going to be something we’re all going to be very interested in and following quite closely. Unfortunately, the only devices we got to see on the floor were rigged with just a demo that didn’t allow us to see any of the touch screen action at all. We also noticed that the hinges were a quite floppy, but this could just be from tons of folks picking the device up on the floor.

This is obviously being targeted towards a Windows 7 release to take advantage of multi-touch so there’s no real rush. The device itself is very, very attractive to look at, and besides that hinge it feels really good in hand. There were both 8.9 inch and 10 inch models on display. Note also the GPS and included TV tuner on the specs in the pictures below the jump.