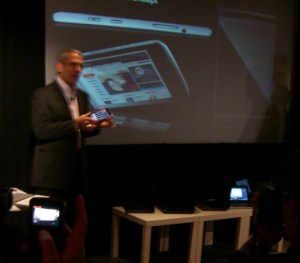 IAdmittedly it would be tough to make a less exciting state tablet announcement than last night’s, but Dell offered a good show for their slate tablet.Â  It’s a 5″ unit running Dell Android.Â  And that’s about all we know.Â  There was a short concept Video showing some amazing sharing and collaboration features, such as a card game where you seethe cards being tossed between units. But alas it was just a mockup and even the presenter could not commit to it ever being released. Oh well, not like there aren’t other 5″ slates running Android.