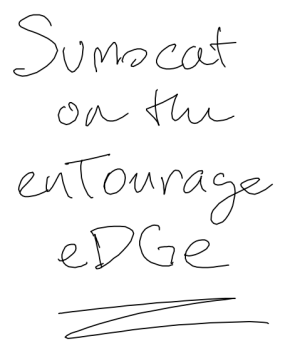 I’d seen it on the first day. Handled half-functioning units at other booths. But not until my last day (and first full day on the floor) did I get a full demo of the enTourage eDGe, the eReader I’d been eyeing since learning there was a Wacom Penabled digitizer beneath that e-ink screen.

Really hoped it could be something I could use as an ink blogging machine, but there were a few limits. Obviously, it’s only in black and white. The included stylus is the Wacom slim pen, which is not pressure sensitive. This limit is in the digitizer as well, which I confirmed with my own stylus, which works as it should on a Wacom Penabled system. Journal entries in their native format (not sure what that is) only open in the e-ink side. There is a PDF export option, which I used to capture the ink sample here. Obviously not great, but not terrible either. No handwriting recognition yet, but it’s in the works. I think the inking was fine enough for annotating an eBook or even as a replacement for a paper notebook, but I’d personally wait on on a handwriting recognition engine for searchability. 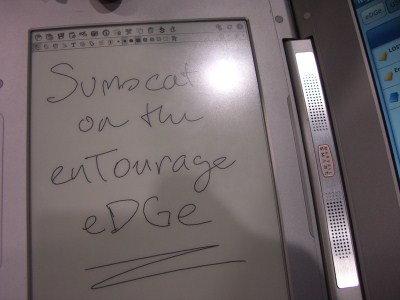 As for the LCD side, I wasn’t digging the desktop-like interface on the home screen, but the interface once you get into the folders was effective. The video quality was not HD but adequate. A bit compressed but smooth. The ability to watch videos full screen is pending. The interface, overall, needs the rough edges rounded and polished, but it works.

The physical package felt better than other versions I’d handled during the week. It looks heavier than it felt. Handled with both hands, it was more comfortable than a hardcover book of similar size. Folded up, I moved it around with one hand easily. I think it would be easy to grab out of a satchel or messenger bag. Not sold on it quite yet, but I definitely want to give the final version a thorough run-through.