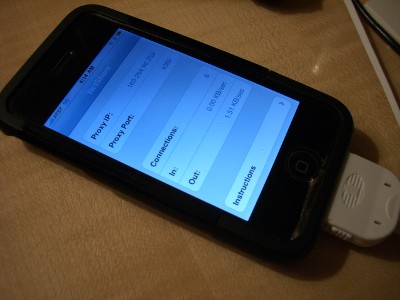 As Xavier pointed out, there’s not enough voice connectivity to go around at CES, even though the main event hasn’t started yet. My brother who resides in Vegas tried calling me a few times and nothing came through, not even the call record. However, he mentioned that calling is terrible in the casino areas, so I’m guessing there are other factors involved. Also, there was no stopping the emails from coming through, so data seems oddly unhindered, something I’m testing with Netshare on my iPhone.

I’m sitting pretty in The Encore, which offers in-room wifi for $14 a day. It’s more than I would pay normally, but these aren’t normal conditions. Before I take the plunge, however, I decided to give my iPhone’s 3G a go. I was one of those lucky guys who managed to snag the Netshare app before it was yanked (then returned and then yanked again). And yes, despite fears of there being a “kill switch” for yanked apps, it still works for me. In fact, it’s running better than ever since I upgraded to Windows 7. Network connection is much easier to make, and Proxifier for the proxy connection still works smoothly.

3G isn’t as fast as wifi, but it uploaded the six photos in my “First Impact” post without choking. It hits the biggest bump when I try to refresh multiple windows simultaneously, needing to split the bandwidth among the requests. But I’m not seeing any network issues up above the crowds last night or this morning. Getting connected seems to be all about location… almost.

One problem I’m having doesn’t have to do with the network but the massive power drain of shuffling data back and forth between 3G and wifi, compounded by the fact the app must remain active (i.e., power-draining screen on) to do the work. Even plugged in using the AC adapter designed for fast charging, using Netshare, my iPhone just can’t draw enough juice from the wall outlet to keep from tapping the battery. Not a problem if I start with a good charge, but my iPhone fell into a coma quickly after I returned to the room after yesterday’s busy night. Still, it did last long enough for that one post and had I turned it off while mocking up that “special” photo, I could have tossed that up as well. With proper management, like turning it off while I hammer out words like this, it can work.