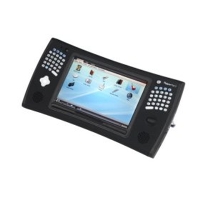 One of the vendors I really wanted to check out at CES was Hanbit America, the folks behind the PepperPad. I’ve read a lot about the device, but have never had the opportunity to try one out and compare it to the Origami / Ultra-Mobile PC. Holding the device with the split keyboard gave me some real insight on what would help the UMPC market in regards to built-in keyboard support. The PepperPad sells for $645 on Amazon.com ( affiliate link ), and is available in various colors like Pink, Black, and Silver.

While looking at the PepperPad, Matt and I spotted the well-known OLPC that was also running the PepperPad software. It was interesting seeing the OLPC up-close. It felt like my kids Leapster. Although the OLPC is a convertible, they are not touch enabled, which kind of surprised me.

The audio on this InkShow is not top knotch, as we were having issues with the wireless receiver. I had to adjust the audio in the video after getting back from Vegas. The info is still valuable and gives a good look at the PepperPad, so I decided to post it anyway.

Woud I buy one? I might if it were a tad cheaper. I’d probably consider it for my kids if it were under $500. I’m really intrigued by the device, and like their approach to the keyboard. This is a definite competitor to the Origami / Ultra-Mobile PC platform, although I know I would miss the Tablet PC inking support.