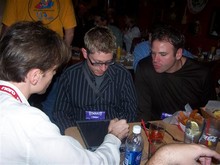 What a party! This year’s Tablet PC and UMPC Meetup turned into quite a shindig. I heard a headcount of around 100 or so in attendance at Cheesburger Las Vegas. Numbers are one thing, but let me tell you the feeling in the room was thrilling throughout the evening. With a mix of Tablet PC evangelists, users, OEMs, developers, Microsoft folk, and a few friends and family in attendance, you could feel a very positive energy emanating within the room.

In certain corners of the restaurant folks were showing off their own personal machines, next to manufacturers who were showing off accesories. In one area, TabletKiosk’s Martin Smekal engaged the Neek Talkers, (Elizabeth, Sarah, and Kim Heiny) in a long conversation. Watching that occur from a distance lended a very special feel to the event that is really hard to describe, even though it is often done so with the word communiity. It certainly is a community of like minded individuals, but in my humble opinion, the energy coursing through that room was bigger than just the sense of that word community. 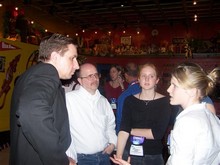 The room was also filled with many meetups between individuals who have known each other virtually for some time but had never met in person. Watching James Kendrick, Kevin Tofel, and Matt Miller meet for the first time as a trio was very exciting and reminded me of the very warm feelings that the members of the GBM team had just a few short days ago when, for the first time, we all assembled in one place. I personally enjoyed meeting a number of folks in real life including Marc Orchant, Kevin Tofel, Matt Miller, James Provence, Chris Coulter, and many GBM readers.

It was a night that also saw a number of the companies in attendance offer prizes for a drawing and as well as swag. The big prize of the night was won by Joan Heiny, who won a Motion Tablet PC configured to her liking. TabletKiosk, Intelligent Technologies, and Otterbox also provided prizes, and yours truly here was the winner of the Otterbox Case.

This entire evening would be possible without the work of the First Lady of The First Family of Tablet PCs, Lora Heiny, so everyone owes her a big thank you. And speaking of the First Family, it was great to meet Robert and Joan Heiny, the folks responsbile for all those Heinys, and although Loren wasn’t there, he and his brother Layne, who was in attendance, hooked up a webcam and streamed the event live. (You can check it out here.)

I could go on and on, and may at some point in the future, about how special an event this was and in all honesty, it was the highlight of the trip for me.

Speaking of trips, the GBM Team is headed out of Vegas early in the morning with lots more posts and Inkshow action coming your way once we all return and settle  back to our routines after spending time in Vegas. I would imagine posting would be down tomorrow, but I’m guessng very soon things will heat up again as we bring you more from CES.