Despite Google’s best efforts with Ice Cream Sandwich, the homescreen interface for Android tablets could be a lot better. Chameleon, a new Kickstarter project hopes to improve the Android homescreen.

Chameleon is a homescreen replacement app from Teknision that uses a collection of custom widgets to make the Android tablet homescreen neater and more useful. The app has widgets for Twitter, Facebook, Instagram, Netflix, Gmail, Google Drive, weather, calendar, media player, and an RSS reader. Users can arrange the widgets anyway they like according to the app’s grid layout.

The Chameleon homescreen can change according to time of day, WiFi network, and GPS location. Users can set the app to use one homescreen with weather, email, and maybe news and social networks for the morning, another with calendars and email at work, and another one at night with social networks and media. Users can have a number of homescreens available, and can easily switch between them at any time.

Unlike a custom ROM, Chameleon doesn’t replace everything on the Android tablet, it just replaces the homescreen if users want it to. The default homescreen will still be available, should users change their mind.

The app works on any Android tablet running Honeycomb 3.2 or higher with a screen resolution of at least 1280×800. Teknision optimized the first release for 10.1-inch displays, but it will work to make sure it works on smaller tablets as well. 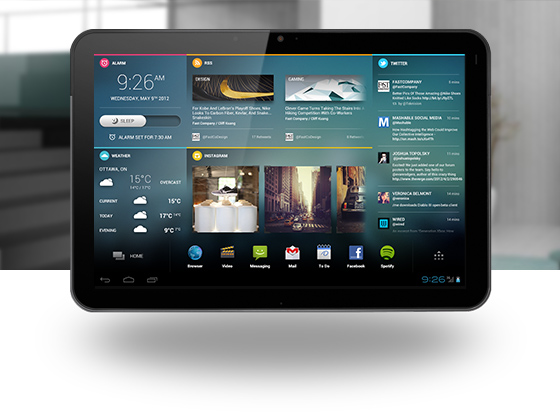 A Kickstarter pledge of $5 or more will net backers an early release of the app. Teknision aims to have the app in the Google Play Store in September, but backers will receive it in August. A $10 pledge will also get backers wallpapers designed to look nice with Chameleon. Other rewards include T-shirts, a “custom DNA11 FingerPrint Portrait,” and even a Samsung Galaxy Tab 2 10.1 with Chameleon pre-installed plus extra goodies for $5,000.