We all know that touch is a big and getting bigger as a way of interacting with your data on your computer, and we all know that there are other methods as well. Voice comes to mind. And of course if you’re a Tableteer, you know about the stylus. But there are other methods on the horizon, (or here actually in some forms) as well. The games showed as a part of the iPhone’s new SDK show that accelerometers can be more than just a curiosity and screen rotatation method. The Wii also comes at controlling games differently. 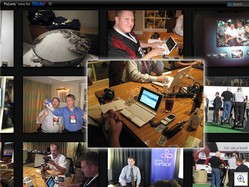 This New York Times article, Coming Soon Nothing Between You and Your Computer, takes a look at these types of innovation that take users to different realms of maniuplating their work/play space. One of the examples, cited in the article, PicLens, is a Firefox add on and works pretty well with Flickr, Google Images, Facebook, and some media related RSS-enabled sites. Basically, it the site enables PicLens, you can manipluate images and data by sliding through an ever changing 3D-like canvas. (It looks very Media Center like, but with that 3D-like effect.) I don’t have a touch screen handy so I’m experimenting with this on a Tablet PC using a stylus and and/or a keyboard and it is indeed kinda cool. Anyone with a touch screen device who checks this out, leave a comment and let us know how it works there.